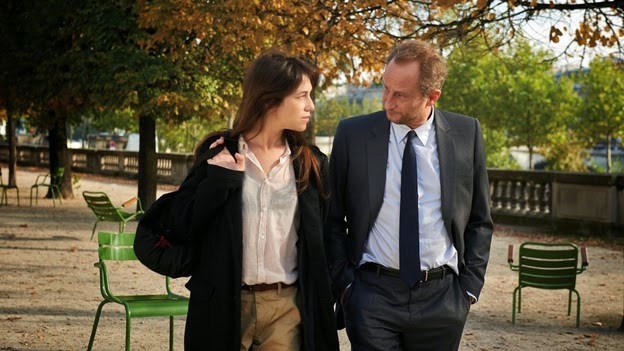 3 HEARTS is a rather dull French romantic comedy featuring a meet-cute, a surprise re-meet and many other cliches of Hollywood banality.  The fact that it's a French movie has somehow elevated this workmanlike film into the realms of being selected for the London Film Festival. Don't be fooled. There's nothing to see here.

Benoit Poolverde (COCO BEFORE CHANEL) plays a dull tax inspector called Marc who misses a train home and meets a charming woman (Charlotte Gainsbourg's Sylvie) with whom he walks the streets of a provincial town in the manner of BEFORE SUNRISE.  No matter, they separate, their planned meeting never happens.  Later, Marc meets a lovely antiques dealer called Sophie (Chiara Mastroianni) and they marry and start a family.  They never meet the enigmatic sister, because hey, she lives in the US and they just never get round to skype-ing. These contrivances continue until the the necessary confrontation of all three lovers as supervised by Catherine Deneuve's matriarch.

The resulting film is banal, predictable and oddly uninvolving.  Charlotte Gainsbourg's trademark froideur just doesn't work in a movie where we're meant to sympathise with all three sides of this thwarted love triangle.  A misfire on all counts.

3 HEARTS aka 3 COEURS has a running time of 90 minutes.  The movie played Venice, Toronto and London 2014.  It opened earlier this year in Belgium and France and opens in the Netherlands on November 6th and in Italy on November 27th.
Posted by Bina007 at 21:00