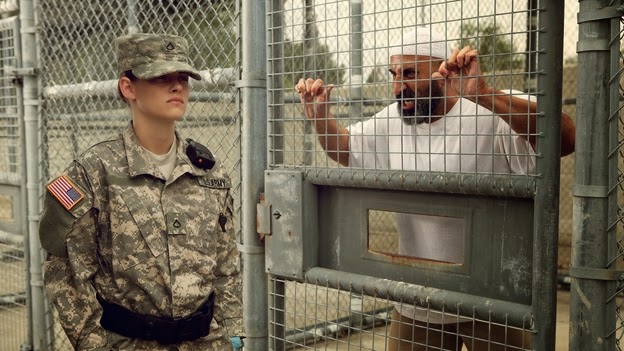 CAMP X-RAY is a moving and deeply humane film about two people coming to an understanding despite the invidious circumstances in which they find themselves. Playing essentially as a two hander, the movie allows Kristen Stewart to give her most mature and nuanced performance to date, and hopefully for Peyman Maadi (A SEPARATION) to find a wider audience. Together they create a story that is funny, tragic, fragile and full of vulnerability.

Stewart starts as an army private struggling to find her footing in Guantanemo Bay.  She's determined to prove as tough as the men and just wants to do her job.  The movie is about her opening her eyes to how the prisoners are treated - allowing herself to see one in particular as a man rather than a number - and to identify with him as a marginalised person in a culture where the rules are stacked against them. For her, it's dealing with a macho ask-no-questions culture of petty and sometimes flagrantly abused rules.  For him, it's realising that she isn't just another rotated US soldier - and maybe if she can't understand the torture he has suffered, she can genuinely sympathise with him.  Through this mutual respect we leave them as more self-aware, and maybe stronger people, despite the sadly credible circumstances they have endured.

Despite the inevitable comparisons with ZERO DARK THIRTY this is a completely different film. It's a film that is focused and almost austere in its gaze and indeed in the way in which it was produced - sequential shooting in 21 days.  Most of all, it isn't a film about politics per se, or about a woman becoming as tough as the most gung-ho man to prove a point. It's far more subtle, and it's gaze is more intimate. As a result, it's far more compelling and affecting. Kudos to all involved.

CAMP X-RAY has a running time of 117 minutes and has been rated R in the USA.