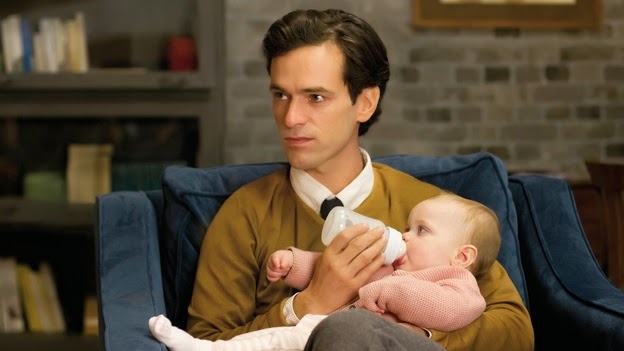 Francois Ozon is back with another deliciously subversive and yet psychologically credible drama charting the hidden desires of the bourgeoisie. THE NEW GIRLFRIEND revolves around a series of sexual desires and fears that are awoken when a young mother tragically dies giving birth. Her husband David (Romain Duris) finds that her death, and perhaps more specifically the need to both father and mother to his baby daughter, awakens his old desires to dress as a woman. The subject matter is initially treated as a joke - something for shock value - the absurdity of seeing Romain Duris in a bad wig pretending to be a girl. But as the movie progresses it layers on depth and sympathy. In a pivotal scene, David is moved to tears by a drag act in a gay bar, seeing a transformation to beauty and a confidence in that persona that is beyond his more circumscribed options. The surprise for me is that this film, while about David, is also perhaps more importantly about Claire (Anais Demoustier). She is the loyal and loving best friend of David’s dead wife and in discovering and then abetting David in his secret transvestisism (is that the word?) she becomes just as confused about her own desires. Does she long for a gay relationship with her best friend, with David in his transvestite role, with David as a straight man, or to be a voyeur to David and her husband?

It’s a tribute to Francois Ozon that the subject matter, while treated with humour, is also treated with sensitivity and courage. No desire is left unturned and we feel credibly in the presence of two good people trying to figure out what the feel and want. The film may not be one of the most formally envelope-pushing of his works, but it may well be one of the most sympathetic. Who knew it would take Romain Duris in a skirt for Ozon to find his heart?

THE NEW GIRLFRIEND/ UNE NOUVELLE AMIE has a running time of 105 minutes. The film played Toronto and London 2014. It opens in Belgium and France on November 5th.
Posted by Bina007 at 23:30