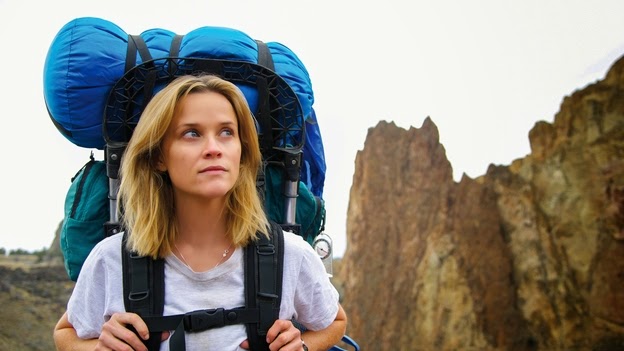 You can listen to a short podcast review of this film here:

This movie is based upon the autobiography of Cheryl Strayed, a college student utterly undone by the death of her mother, who became a sex and drug addict, ruined her marriage and decided to hike the 1,100 mile Pacific Crest Trail over three months to clear her head and come to some kind of self-awareness and self-acceptance.

This could have made for a fascinating and moving story in the manner of last year’s LFF entry, TRACKS, or maybe INTO THE WILD. However, the key defining point of those two movies is that they are not afraid to show their protagonists getting kicked around by life and nature. When Mia Wasikowska tracks through the Australian desert her lips are cracked, her face raw with hot wind, her limbs burned and blistered. We’re not sure what she has come to understand about life but her struggle with it feels credible and her character realistically equivocal. By contrast, in WILD, Reese Witherspoon never allows her character to get roughed up. She hikes for months and complains about stinking but always has squeaky clean hair and a fresh face. Save for the bruises of martyrdom from her backpack and one opening shot of a bloody toenail it’s not credible that she’s undertaking this journey. Her kit always looks freshly laundered. Moreover, she doesn’t seem to encounter any real adversity. Her backpack is comically to heavy to lift up in the first scene, but after thirty seconds she’s walking with it happily. Every man who might be a threat turns out to be charming and even the forest services give her coffee and a donut. Where’s the self-realisation through suffering there? The underwhelming nature of the trip is summed up by the final shot at the Bridge of God - we have been led to believe by its name that this will provide some great epiphany but hey it’s just a steel suspension bridge and she looks at it rather wanly and doesn’t even cross it.

If all this weren’t bad enough, Cheryl’s hiking trip is intercut with flashbacks to her past. Her mother (Laura Dern) is portrayed as a kind of saint - every perfect, smiling, singing and wise. No wonder Cheryl took to heroine failing to live up to this unblemished mother figure. And let’s be honest, there is apparently a limit to how bad Reese Witherspoon will let herself look, even when playing a junkie shooting up in a squat. Contrast this with the actress playing junkie Sanne in Susanne Bier’s stunningly good drama about grief, A SECOND CHANCE. Now that’s how you do emotional trauma and redemption. The final insult is a technical one. You’d think that a movie that spends this long in nature reserves would contain some amazing landscape photography of the kind we found in Mike Leigh’s MR TURNER or Fatih Akin’s THE CUT. But no - director Jean-Marc Vallee (DALLAS BUYERS CLUB) and cinematographer Yves Belanger - give us nothing that is out of the ordinary - nothing that makes us feel Cheryl’s head clear and her heart soar.

Overall, one can’t help but feel that this is a cynical attempt for Reese Witherspoon to break out of the rom-com’s she’s now too old for and to earn an Oscar. I know it’s a thin year in the Best Actress race but it would be shocking indeed to see this do well either in awards season or at the box office. Avoid.

WILD has a running time of 115 minutes and is rated R. The movie played Telluride, Toronto and London 2014. It opens in the USA on December 5th, in the UK on January 16th, in Estonia on January 30th, in Germany, New Zealand, Austria and Romania on February 5th, in Denmark, Italy and Portugal on February 19th, in the Netherlands on February 26th, in Belgium, France and Norway on March 5th.