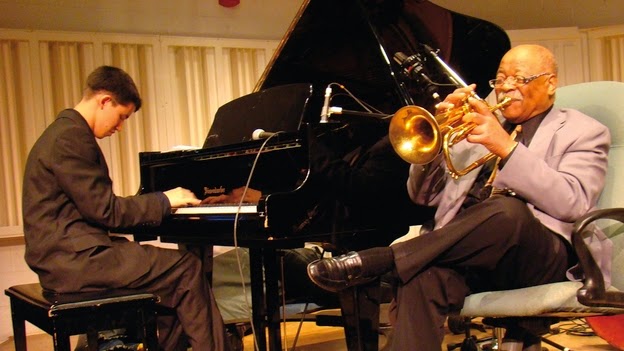 Oh man. I cried like a baby for pretty much the final half hour of this amazing documentary, but not for sadness but sheer joyfulness.  It was truly an honour and a pleasure to be in the presence of these two great men - men first and musicians second.   To see a young kid - Justin Kauflin - go blind in sixth grade and still say he wished something bad would happen to him so he could play the blues right.  And then this prodigious jazz piano talent tempered with stage fright.  He's taken under the wing of the legendary jazz trumpeter Clark Terry - a veritable history of jazz in one man.  "CT"  grew up playing with Count Basie and Duke Ellington, mentored Quincy Jones, earned the respect of Dizzie Gillespie and inspired everyone from Miles Davis to Winton Marsalis. And if being a jazz legend wasn't enough, he went beyond his own career to pretty much invent jazz education and tutor others - starting with "Q" and certainly not ending with Justin.

I came to this doc, maybe like many people, expecting a straight ahead summary of all that is great in Clark Terry's music: his dexterity and wit.  What I wasn't expecting was to leave the doc more impressed with CT the man, than CT the musician.  He's in his nineties now, struggling with complications from diabetes, but even on the eve of surgery, the tunes just come pouring out. And let's not forget the love. In a cynical, messed up world, to see his wife of decades, Gwen, keep strong for him - their love and devotion - and the halo of positivity that it brings to all who touch them - is really something else.

I count myself as a fairly cynical person but I'm welling up right now just writing about this documentary.  Please don't be put off just because you're not a jazz fan - although of course it's greatest satisfaction will come to those people. It's a doc for all of us who need to be inspired and who are dealing with ageing parents and grandparents - or just ourselves. It teaches you about hard work, integrity and most of all joyfulness.  Thank god for it.

KEEP ON KEEPIN' ON has a running time of 84 minutes.