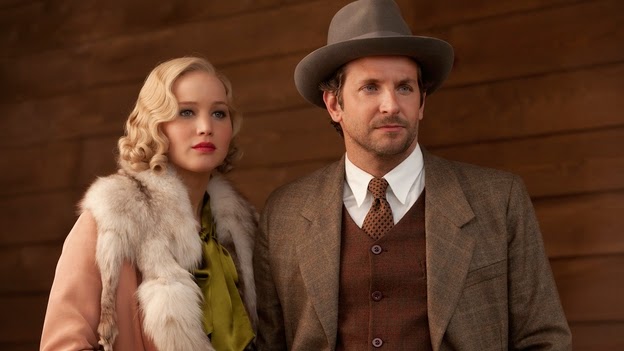 Sweet tap-dancing Christ, SERENA is so bad people were laughing at the movie at the screening I attended.  In fairness, this final act hilarity was a massive improvement on the sheer tedium, implausibility and banality of the first hour of the film.  God knows what Jennifer Lawrence and Bradley Copper were thinking of in signing up to this garbage and I'd love to hear from anyone who read the book upon which the movie is based as to whether it's better/different/other to what landed on our screen.  What's equally bizarre and shocking is that the film was directed by Susanne Bier, whose A SECOND CHANCE is also screening at this year's London Film Festival and is possibly one of the best films this year.  One cannot imagine the distance between A SECOND CHANCE's quiet intensity, closely observed emotion and tense climax and SERENA.  Both films are about the powerful emotions prompted by parenthood but they are otherwise like chalk and cheese.

So, let's take a step back. SERENA is set in depression era North Carolina. Bradley Cooper plays George Pemberton, the indebted owner of a lumber yard. Rather than marry for money he marries a hard-headed businesswoman called Serena (Jennifer Lawrence). A double threat hangs over the couple. Their business is in hock, and their land threatened by its potential forced purchase to create a national park. Second, Pemberton is hiding an attachment to his illegitimate son, something Serena finds intolerable once she loses her own child.

The characters begin as tough and cynical - unwilling to let anyone get in the way of their success. This makes it hard to sympathise for them when they meet tragedy - and all the soupy orchestral scores and dreamy photography can’t overcome this central problem in the film - it’s hard to care about the fate of people we hate. Moreover, as the movie progresses we see the cracks show in the screenwriting, direction and acting. As Serena becomes more unhinged the movie tips over the edge of heightened drama into cheap melodrama, and the attempted reformation of her husband seems automatic and unconvincing. Of course, by this point we care so little about their fate that it’s just a mad dash to the end. And wow! what an ending. I don’t think we’e seen such an absurd and literally laughable denouement to a male protagonist in quite some time. It’s the stuff of Razzies and spoof fan service.

I would simply repeat: it’s hard to see how so many actors and a director of quality went so wrong. I guess it sometimes happens with movies: good intentions just get out of control and the end result doesn’t look like the storyboards. At any rate, this is a film to avoid at all costs. The good news is that the stars are so big, their careers are unlikely to be dented by a small fall.

SERENA has a running time of 102 minutes.  The movie played London 2014 and opens in the UK and Romania on October 24th, in Spain on October 31st, in New Zealand and Finland on November 6th, in France on November 12th, in Portugal on November 20th, in Australia on November 27th, in Italy on November 30th, in Lithuania on December 5th, in Germany, Greece and Singapore on December 18th, and in Ukraine and the Netherlands on February 5th.
Posted by Bina007 at 18:00