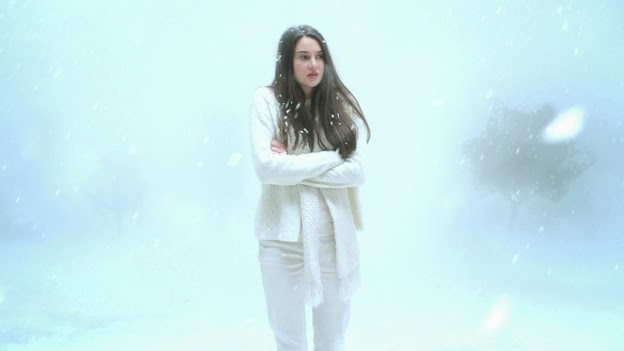 WHITE BIRD IN A BLIIZZARD is the latest Gregg Araki movie after his brilliantly crazy over-the-top half-disastrous KABOOM which played the London Film Festival back in 2010. This movie seems far tamer and more contained - is equally hit and miss - but as ever contains just enough surprising good stuff to keep you in your seat.

The film plays as a kind of did-anyone-do-anything turned whodunit. As it opens, we’re in late eighties suburbia and Kat (Shailene Woodley) seems like a remarkably well-adjusted confident girl even as her depressed mother (a typically deliciously unhinged Eva Green) goes missing. Kat’s assigned a therapist and whatnot but seems utterly unfazed by her mother’s disappearance, using it as an opportunity to bang the hot cop assigned to the case. Fast forward a couple of years and she’s at college, and still looks really well adjusted. Until she goes home and everyone else seems to be telling her that they told her something was odd about her mum’s disappearance, only she was in denial. And so we work our way back through the events of the disappearance until we see Kat accept how deluded she was.

As a mystery thriller, the movie doesn’t work particularly well, with at least one major plot hole. It isn’t suspenseful, although I suppose part of the point is how Kat isn’t suspicious - hence the title. But what Araki does well is showing with a casual intimacy relationships between teenagers and young college students.  He talks about sex without flinching or judging and it's a pleasure to see Shailene Woodley break out of her far more conventional goodie two-shoes heroine roles to play a far more self-absorbed equivocal and sexually confident character.

WHITE BIRD IN A BLIZZARD has a running time of 90 minutes and is rated R.  The movie played Sundance and London 2014.  It opened earlier this year in Brazil and France. It opens in the USA on October 24th, in Iceland on November 7th, in Belgium on November 12th and in the Netherlands on November 20th.
Posted by Bina007 at 23:06