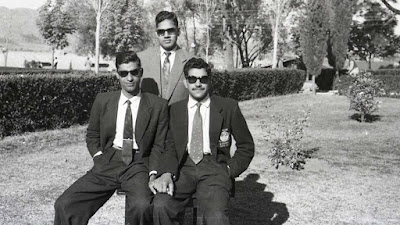 Arshad Khan's biographical documentary is fascinating and beautifully constructed. Using a mixture of family photos and home videos intercut with animation, clips from Western and Bollywood films, he creates a compelling and authentic collage of life in 1980s Pakistan and then as an immigrant in Canada.  His childhood seems impressively liberal - he dances with his siblings to Western music.  But he knows he's different, and when dressed by his sisters in girls' clothes he is molested. Later, his father becomes increasingly religious and thus disturbed by his son's homosexuality. He tries proselytising in the car in Canada, and then confronts his son and asks him to get psychological help - equating homosexuality with alcoholism - something that can be recovered from.  But at least Arshad is out of the closet, working as an airline steward, and discovering the gay subculture.  9-11 proves to the tipping point, as for so many others.  His parents become even more extremely religious and he becomes politicised. This is where I found the documentary to be the most fascinating - because it takes us into tv clips of radical preachers that we might not otherwise see and shows the impact on a previously liberal family.  The mother who used to dance to Pakeezah songs in her living room now refuses to leave the house without the permission of her husband, and thinks her son is belligerently refusing to be straight.  They make pilgrimages and there is a kind of rapprochement between father and son, but ultimately this is a story about failed connections and irreconcilable differences. Arshad's articulate sister posits a theory that when immigrants fail to find an easy entrance to a different society then can fall back on religion because it's a place of belonging and easy answers.  In this discussion of why assimilation fails, and why liberal humanist values do not translate, this documentary moves from being a personal journal to of universal and urgent relevance today.  In that, it makes a superb viewing partner to the equally provocative and interesting AZMAISH: A JOURNEY THROUGH THE SUBCONTINENT - also playing at this year's festival.

ABU has a running time of 80 minutes. The film is playing the BFI London Film Festival 2017. There are tickets available for both screenings.
Posted by Bina007 at 07:38