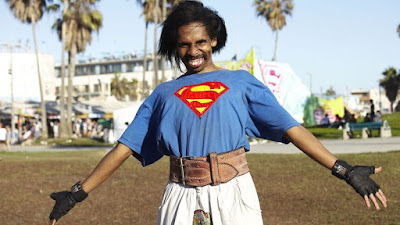 ROLLER DREAMS is a lighthearted and somewhat slight documentary about the roller dancing culture that took off around Venice Beach in the early 80s, inspired a handful of white-appropriation cheesy movies, and was finally run out of town by a combination of unsuitable gangsta rap music and gentrification aggressively enforced by the local police. The vintage footage of the dancing is impressive and the talking heads rather melancholy - one of the OG dancers is living in a garage, another is almost in tears when he can no longer skate, only a third thanks skating for helping him get a modelling contract and put his kids through college. Where the documentary is most disappointing is in its superficial investigation of race.  I wanted more talking heads of people explaining why black people could only hang out in Venice, and the way in which the skating community responded to the Watts riots and Rodney King, and if the police were truly brutal, then let's hear from some of them or local politicians or local journalists.  Otherwise, we're merely left with a large crowd-pleasing but trite standard doc about a slice of Americana hinting at larger issues it doesn't have the commitment to truly investigate.

ROLLER DREAMS has a running time of 82 minutes. It won the Audience Award at Sydney 2017. There are still tickets available for all the screenings at the BFI London Film Festival.
Posted by Bina007 at 20:15