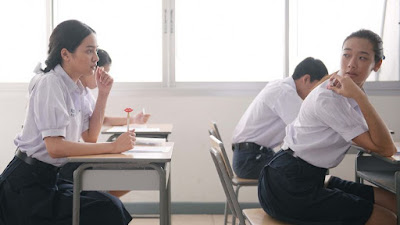 BAD GENIUS is a superb thriller and social criticism of the high pressure and corrupt elite education in Thailand.  On one level, it can be watched in the same way as one would watch a heist movie like OCEAN'S ELEVEN - there's a caper, obstructions, high stakes, and a thrilling pay off.  This is all handled with a slick and impressive visual style.  But the more satisfying way to read the film is as a criticism of the class divide in Thailand, and how the rich always get to exploit the poor, and get away with it too.

As the movie opens we see our heroine Lynn join a prestigious Thai private school on a full scholarship. She's befriending by Grace and Pat - two academically stupid but cunning rich kids who persuade her to help them cheat on their exams, at first out of friendship, and then as a more general money-making exercise.  At first, Lynn is wide eyed as she realises how corrupt the education system is. Rich parents but the school equipment to get their kids good grades, and flagrantly bribe Lynn to attend the same university as their kids so that the scamming can continue beyond school. In such an environment why shouldn't she make money and game the system too? This all culminates in a giant scam that sees Lynn and her at first reluctant fellow scholarship student Bank travel to Sydney to take an international academic test and then send the results back to their Thai clients. And this is where the film reaches its brilliant best - both in terms of ratcheting up the tension of the heist - and posing really tough questions of social justice. To say more would be to spoil it, but I think this is a tremendous film in that its both truly exciting and profound.  Kudos to all involved.

BAD GENIUS has a running time of 130 minutes and opened in South East Asia earlier this year.  It is playing the BFI London Film Festival 2017 and there are tickets available for all screenings.
Posted by Bina007 at 07:10