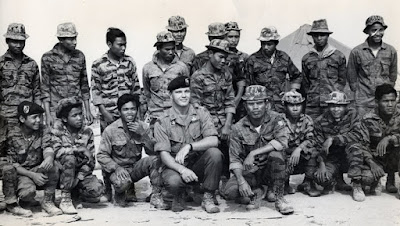 Andrea Luka Zimmerman's documentary about Vietnam veteran turned TV personality Bo Gritz is a deeply dissatisfying and disorganised work that fails to truly get under the skin of its subject.  In the film-maker's defense, that may because Bo is a clever construct - a fantastic and mythical character designed to appeal to the worst of America's macho militaristic culture. The facts are that Gritz was a soldier in Vietnam who killed hundreds of people, using questionable methods, trained the mujahideen in Nevada, accused the US government of selling drugs in SE Asia, and played conciliator with a white supremacist, even offering up a Nazi salute. It's also a fact that some of this must haunt him because he recently tried and failed to commit suicide.  This picture of an ethically questionable and mentally fraught individual is however masked by the Bo Gritz avatar which is a man of derring do. He cons Clint Eastwood and William Shatner into giving him money to rescue US POWs left behind in Vietnam, but fails to rescue them, because they probably didn't exist. That doesn't matter of course, because he sells this tale to a movie studio for RAMBO II, a movie so at odds with the sensitive alienation and mental fracture of FIRST BLOOD as to be unrecognisable.  You get the feeling that Bo is so open with the media, and this doc, because part of him loves the attention. He even went for a presidential run, and seemed to revel in a kind of messianic status.

So Bo Gritz is indeed a fitting subject for a doc, not least for what he tells us about american society - what it values and what it chooses to forget. But sadly, this documentary never really puts Bo on the hook for his past, his lies or his Nazi salute.  And it doesn't clearly show you what footage you're watching or where in his life we are.  Even worse, Andrew Luka Zimmerman uses a technique brought to prominence by Joshua Oppenheimer, of having a war criminal re-enact his atrocities. This feels like a cheap imitation and doesn't serve any purpose as Bo won't go emotionally deep enough on screen to have any kind of meaningful reaction.  The result is, then, a documentary where it feels like the subject is playing the director, and it's deeply frustrating.

ERASE AND FORGET has a running time of 90 minutes. It is rated 18 for graphic images of real dead bodies and injury. The film played Berlin 2017 and will play the BFI London Film Festival. It will be released in the UK on March 2nd 2018.
Posted by Bina007 at 08:01