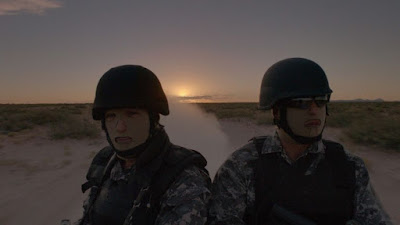 Serving as a powerful counterpoint to SICILIAN GHOST STORY, Everardo Gonazalez' DEVIL'S FREEDOM is a chilling and unforgettable documentary about the consequences of drug related violence in contemporary Mexico.  Gonzalez interviews both victims and perpetrators of murder rape kidnap and extortion - and hidden by unsettling and levelling surgical masks - their testimony has both candour and power.  What's amazing is how much one can get from the eyes and intonation despite the masks - and yet how honest people are believing they are masked.  You have a schooled describe the weight of a gun and thrilled with the power of his increasing number of kills - a mother in tears as she describes punching police officers to get to the body of her dead son - policeman uncovering corpses that died with their mouths open, signifying that they were buried alive.  The result is a film that is relatively short but rightly intense.  A brave and bold way of showing the horror of life in a country where violence is commonplace.

DEVIL'S FREEDOM aka LA LIBERTAD DEL DIABLO has a running time of 74 minutes. It played Berlin 2017.  Tickets are still available for both screenings at the BFI London Film Festival.
Posted by Bina007 at 07:30