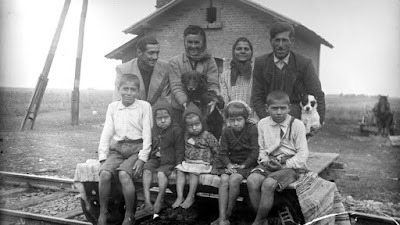 This year's festival contains a handful of absolutely searing documentaries showing societies where violence and hatred are endemic, but none quite as slippery and tragic as Radu Jude's THE DEAD NATION.

His film does two things. On one level it's a straightforward linear account of just how quickly Romania succumbed to anti-semitic fascism in the 1930s, as told in the memories of the Jewish doctor Emil Dorian. We hear this shocked liberal well-informed man tell us how Jews have been expelled from medicine, then from civil society altogether - to the point where he must even prove his right to citizenship.  The new fascist Romania moves quickly to barbarism - he calmly tells us how Christians now have several ways of referring to Jews - "dirty Jews" etc - and how the Jews have been to put to hard labour, and how many cases of frostbite he's had to treat.  Set against these everyday terrors, news comes from afar, of massacres, rapes, trains  of Jews being sent away, and then with alarming precision, the testing of a new gas on 400 Jews, now dead.  The Holocaust comes with a slow certainty from afar, and how can we say that "ordinary" people didn't know when one could read of such gas experiments in the newspaper?  Dorian even hears news from abroad - such as Thomas Mann condemning the German nation for allowing this to happen.  Finally, methodically, we move through the years to 1945 and the war is over.  The Soviets are now hailed as heroes and Dorian sceptically predicts that they too will use anti-semitism to control the nation.  There's a wry hope for elections, but it's as if we're in on the joke. Romania will remain governed by totalitarian populists.

Set against this straightforward and deeply affecting narrative, we have the subversive use of photos and songs to echo, contradict or debate the doctor's account. The photos are black and white plate photographs taken in a professional studio in a rural town, selected by editor Catalin Cristutiu from a trove of 8,600 such pictures recently discovered.  So when Dorian tells us that the Roman salute has become mandatory, we see photo after photo of proud peasants, professionals, happy families, children, all giving the terrifying salute.  Increasingly, as the war begins, those photos feature men in uniform, proudly displaying guns. Of course, the photos don't show the terror unleashed on the Jews - but rather the smug bourgeois men and women who perpetrated it.  So when Dorian describes some of the Christian women who become fascist thugs, we see happy domestic pictures of contented mothers. The feeling of unease and of half-truths is emphasised by the use of propaganda speeches and songs.  The language used is that of tinpot fascists the world over - purity, strength, unity, family, sacrifice, loyalty. No mention of the race that will be sent to the Gas Chambers to achieve this apparent utopia.  The songs, the close part harmony of men marching to war, is even more sinister when placed against Radu calmly reading the memoirs of a sensitive doctor, wondering how artists and poets cope in such times.

THE DEAD NATION is a beautiful, provocative and unique film that tells us a lot about how quickly a country can slip into violent anti-semitism, but also something profound about the way in which we choose to present ourselves and the lies and equivocations that mark the so-called historical record. It's a superb film and a worthy contender in the LFF Official Competition.

THE DEAD NATION was released earlier this year in Romania. It is in the Official Competition of the BFI London Film Festival and tickets are still available for all three screenings.
Posted by Bina007 at 19:10