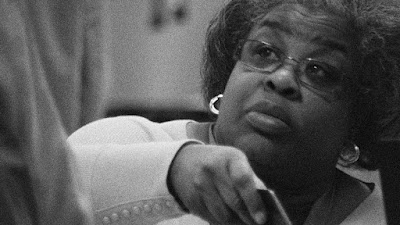 TONSLER PARK is a feature length documentary by prolific shorts director Kevin Jerome Everson. Shot in black and white 16 mil the film takes place in a polling station in Charlottesville, Virginia at the general election of 2016. The location has now become infamous, but viewers looking for context will be left wanting. Rather, this is a meditative micro-focussed documentary, in a style familiar to fans of Frederick Wiseman. The director allows his camera to linger, meditatively, but never intrusively on the members of the Charlottesville community giving up their time to run the polling station and those who elect to vote.  What emerges is a picture of a deep-rooted community and a kind of faith in the system - that the pamphlet on the proposed constitutional amendments will answer the voters questions - that the volunteers swearing oaths to act truthfully in guarding the democratic process will do so.  Their faith is uplifting and this picture of grassroots political engagement challenges my more cynical view of the state of American politics.  The message of this film is, then, profound. That said, I found the director's chosen format - 16 mm black and white - alienating and barrier forming. I wanted to see more of the expression of people's faces and the environment of the polling station.  I couldn't see a compelling artistic reason for the choice. That said, the film was still very much worth watching.

TONSLER PARK is playing the BFI London Film Festival and tickets are still available.
Posted by Bina007 at 07:00