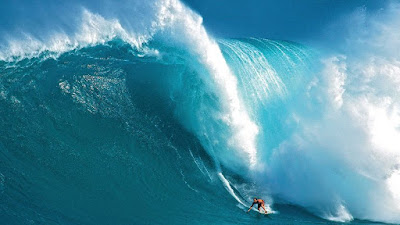 TAKE EVERY WAVE: THE LIFE OF LAIRD HAMILTON is two hours of hagiography mitigated only by some pretty spectacular nature photography.  The director and writer - Rory Kennedy and Mark Bailey - (LAST DAYS  IN VIETNAM) - are captivated by their Big Wave surfstar and give him a pretty easy ride in their chronological trek through his life.  The kid is shown growing up in idyllic circumstances in Hawaii, where the biggest name in surfing marries his single mother, seemingly at his request.  But he's disruptive at school (though this doc shows him as a cheeky scamp) and lives a live of utter indulgence.  He can't be bothered to play by the rules and surf competitively, and when he meets a hot volleyball player he leaves his wife and she moves in with him within 8 days.  Again and again, we are meant to worship him as a pioneer of his craft - and maybe he is - without interrogating his personality.  The result is a fairly dull documentary that will have limited appeal beyond the surfing world. This isn't like one of those mountaineering docs that I love, where you watch to understand the personalities that engage in this extreme activity.  I was utterly bored.  That said, the cinematography of the big waves by DPs, Alice Gu and Don King, was breathtaking.

TAKE EVERY WAVE: THE LIFE OF LAIRD HAMILTON played Sundance 2017 and went on limited release earlier this year. There are tickets available for both screenings at the BFI London Film Festival.
Posted by Bina007 at 07:10