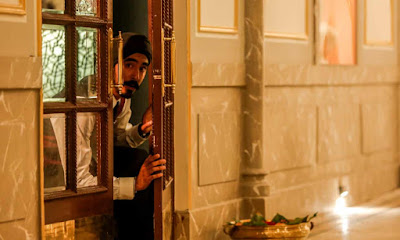 Anthony Maras' directorial debut, HOTEL MUMBAI, is a beautifully handled thriller focusing on the Taj Hotel during the 2008 Islamist terrorist attacks on Mumbai. As so many others, I watched the events unfurl in real time on the TV, and in general I think it's better to approach such topics in documentaries. Fictionalised attempts can feel cheap or exploitative. Which is not to say that this movie entirely avoids kitschy moments. There's a very heavy handed point made about how a Sikh can be mistaken for a muslim by a racist white posh woman.  There's an even worse O Captain My Captain moment when the staff of the ultra-luxe hotel volunteer to stay back and help the guests through the ordeal.  But other than those two very quick moments of cheap emotion, the movie actually handles itself with dignity, intelligence and empathy.

We begin as the terrorists come into Mumbai by boat, the soothing, seductive voice of their handler in their ears, telling them of the glory that awaits them, and how the infidels in Mumbai deserved no mercy.  His voice will be a persistent and sinister presence in the film, goaded the boys into atrocities, gloating at the overheard horror he has unleashed. It's chilling at the end of the film to learn that he's still at large.

We then see the train terminal attack reported on the news, and a particularly well constructed scene in the tourist cafe, so well choreographed as to be shocking, even when we know exactly what will happen.  But the majority of the action happens in the hotel. Ironically, it begins because the staff let in ordinary Mumbaikars fleeing the terror elsewhere in the city. The attackers come in with them.

This is where the film really needs to weave together multiple strands, and it does so with aplomb. We have the front desk staff forced to call guests and make them let the terrorists into their rooms. We have the head chef and waiter (Anupam Kher and Dev Patel) guiding the guests into an exclusive and therefore well hidden VIP lounge.  We have Armie Hammer as an American tourist who has to get back to his suite to his baby and nanny.   And we have Jason Isaacs as a russian oligarch. Both of these men will become hostage targets.

I thought this was an excellent film insofar as it was tense, well orchestrated but also even handed. We care about and spend as much time with the staff as with the western guests. We understand the pressures the cops are under.  And we even spend time with the terrorists while never crossing the line of making them sympathetic.  There's something so authentic and piercing about these guys who've never seen a flush toilet before, or tasted pizza, wreaking havoc in a luxury hotel - a world they are jealous of and feel excluded from - its sumptuous luxuries symbolic of the indulgences they claim to be against. And all the time, the evil voice, guiding them to murder.