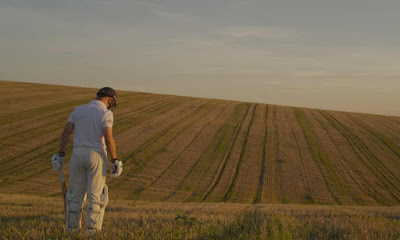 Barney Douglas' documentary THE EDGE is an indispensable watch for ardent English test match cricket fans with impressive access to the main players in one of the most successful but also controversial period's in the team's history - its rise to top ranked test team in the 2009-2013 period and then the acrimonious fall out with its star player Kevin Pietersen. The problem it that the film never asks the difficult question of its interviewees, and allows them to set their own narrative. Perhaps this was the price of gaining access, but ultimately it makes for quite a frustrating viewing experience for those of us truly fascinated by the fracas, who've read all the autobiographies and followed by long-running psychodrama intimately.

So - for example - we have Jonathan Trott being hugely brave and honest, discussing his nervous breakdown during the 5-0 whitewash in Australia during Mitchell Johnson's epic series in 2013.  This is fantastic documentary stuff. But wouldn't it have been even more insightful and hard-hitting, had Douglas not asked Andy Flower (interviewed elsewhere) to talk about what he felt management did wrong in not picking up the signs of his mental stress earlier. I saw him in the hotel lobby the day before the match at the Gabba and as a manager myself, I would never have let him come into any form of work, the state he was in.

Or when Stuart Broad talks about turning to James Anderson and seeing Trott in despair - why not ask why they as senior players who'd played with him so much, hadn't done more. Or even pick up the accusations Kevin Pietersen made in his autobiography that they - with Swanny and others - had created a toxic bullying culture of younger players (and himself). Is it enough just to let Broady deny he made the KP parody account? Why not ask Strauss and Flower why more investigative action wasn't taken?

Maybe when interviewing Monty Panesar, who speaks of stress eating alone in his room, they could've asked him - or Steve Finn - what is was like to be a young man in that dressing room,  or the dressing down you'd get if you dropped a catch. Why not interrogate further the idea, lightly alluded to, that Monty felt he'd become a figure of fun, not taken seriously by the crowds or his team-mates.

And as for Kevin Pietersen, who likes to depict himself as a bullied outsider, why not ask why he feels he was singled out. After all, it was a cosmopolitan team - why not ask what he feels he did to contribute to that. Did he feel he deserved special treatment?

So the movie is good as far as it goes, and adds to the increasing voices of players telling their sides of the story.  But the inability to have the interviewees cross-examined, or even interact with each other on screen and debate some of the thornier issues, is a real problem.

In terms of production values, this movie has come on leaps and bounds from Douglas' first effort, WARRIORS. The score in particular is superb as the animation inventive.  Both add energy to a film that's basically a bunch of talking heads, and in general you have to say that Douglas helps to make a complicated story concise and clear.  I could've done without Toby Jones somewhat hyperbolic narration though.

THE EDGE has a running time of 95 minutes and is rated 15 for strong language. It is available to rent and own on streaming services in the UK.
Posted by Bina007 at 18:23