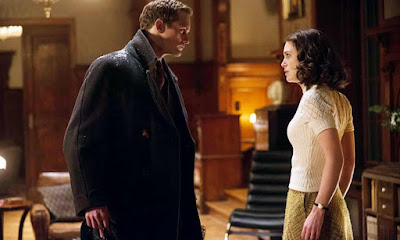 James Kent (TESTAMENT OF YOUTH) returns to our screens with another earnest, deeply felt, beautifully staged, but ultimately un-engaging wartime drama. This time, we're in Hamburg in 1946 during the British occupation of the city they bombed. Jason Clarke - by far the best thing in this film - plays the only really fascinating character - a tight-lipped British officer, turned humane by his brutal experiences of war, struggling to communicate with his wife since the death of their son.  The wife is played by Keira Knightley taking a million steps back from her more challenging and interesting performance as COLETTE to play the kind of role she did before - very posh, very repressed, very superficial British woman. She acts out at her husband's coldness and grief by at first being hateful to the Germans she blames for her son's death, and then having an affair with one of them - the moody, soulful, pretty architect, now houseboy played by Alexander Skarsgard. I've commented before at how uncomfortable I feel when an affair with a third person merely exists to cause self-reflection and evolution for the protagonist. Skarsgard's character is used here in more way than one, leaving a bitter taste in the mouth at the film's resolution. I came to the conclusion that I couldn't believe it because the husband seemed to be operating on such a deeper plane of intelligence and profundity than his wife.  The result is a rather obvious, predictable film, with a hammy lead actress performance and a so-called passionate love affair at its centre than fails to catch fire.

THE AFTERMATH is rated R and has a running time of 108 minutes. The film was released earlier this year and is now available to rent and own.
Posted by Bina007 at 20:09