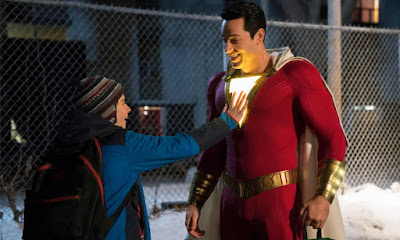 SHAZAM! is one of the goofier of the seemingly endless parade of comic book adaptations that crosses our screens, and it's so asinine I could barely watch through to the end.  It begins with 40 minutes of tedious exposition before we get to meet the superhero. Apparently there's an old wizard (Djimon Hounsou in a thankless role) who hands out superpowers.  He tried giving them to the bad guy when he was a kid but then withdrew them causing his resentment. Said bad guys grows up to be Mark Strong in another thankless role. He's just another disposable bad guy, indistinguishable from the next.  Remember when bad guys were awesome like Jeremy Iron's Scar?  Right.   Anyway, the person who actually gets the good superpowers is an orphan called Billy. His superpowers involve being bullet proof, and stuff to do with electricity, and becoming a beefy adult played by Zachary Levi (THE MARVELOUS MRS MAISEL).  You then get the classic plot of guy goes through life-changing event, alienates all his friends, before third act redemption. Apparently this version is meant to be funny and moving because the friends in question are a bunch of unwanted kids. I thought the whole thing was hammy, predictable, dull and overlong. Didn't laugh once. Didn't care about any of the characters. Sad to hear there's going to be a sequel.