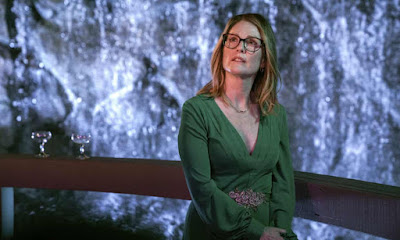 I absolutely loved everything about Sebastian Leilo's remake of his Chilean female-led drama, GLORIA. Julianne Moore give a characteristically strong, charismatic, nuanced performance in the titular role - playing a character rarely seen on screen - a middle-aged woman who is sex positive and living every inch of her life to its fullest. I applaud the messages of this film - that you can be a strong woman with a full life, who doesn't need but is open to a sexually and emotionally fulfilling relationship - and that it's better to walk away from something that is second best. And I am in admiration of both Moore and her lover, played by John Turturro, for being vulnerable enough to show what sex is actually like in one's middle-age, and the complications of relationships with grown children.  The talent behind the lens is just as impressive. Sebastian Leilo has a sure measure of pace, balancing lighter moments of expressive freedom with darker more intimate moments of sadness and self-doubt. The score, by Matthew Herbert, is stunning, combing traditionally orchestrated music with phenomenal electronic almost 80s sci-fi synth moments, let alone the wonderful disco music that Gloria loses herself too.  Finally, the cinematography from Natasha Braier is marvellous in capturing both with its use of colour, light and framing, the different moods that Gloria goes through - whether strong, suffering, free or constrained. This really is a tour de force and deserves to be seen as widely as possible.

GLORIA BELL is rated R and has a running time of 102 minutes. The film played Toronto 2018 and was released earlier this year in the USA. It's just about still on release in the UK in cinemas and is available on streaming services.
Posted by Bina007 at 09:35