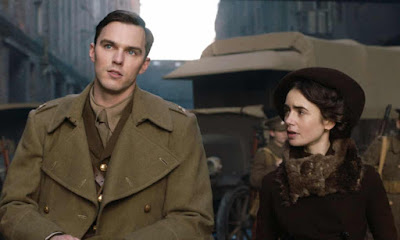 As both a huge fan of test match cricket and Tolkien, it was a rare week to watch both THE EDGE and this biopic.  If the former was frustratingly tame, the latter didn't disappoint. In fact, it rather impressed as a study of a young smart, kind boy, orphaned at an early age, shamed into being the scholarship boy at an academically strong school, finding lifelong friends along the way, and ultimately both loves of his life - philology and his wife. We meet young Tolkien as an orphan, at a smart school in Birmingham, running with a super smart group of boys who must restrict their fantasy life of writing poetry or imagining worlds to their second life - the first aim is a profession.  The film beautifully captures the delicate class balancing act of the scholarship boy, living in a boarding house, courting the lodger's daughter.  He seems to take intellectual conversation for granted, casually cutting her off from discussion of Wagner when she desperately needs the outlet. We are subtly aware that the options for her - a similarly bright and talented woman - are slight because of her class and sex. As the boys move to university - Tolkien to Oxford - we discover that he nearly flunked out but was rescued by a philology don who allowed him to transfer courses of study.  I hadn't realised that this was the case, but thank goodness! But all too soon, war breaks out and the friendships of youth are tragically curtailed - whether by death or the traumas that estrange because they are unutterable.

All of this is sensitively and handsomely told, with Nicholas Hoult capturing both Tolkien's earnestness and his sense of child-like fun.  Lily Collins is superb in her few pivotal scenes, and together, this as her performance in LES MISERABLES show that she has real talent when challenged with good material. But best of all for the fans, we see everything that makes Lord of the Rings so unusual in fantasy literature. For here is an author who has actually fought in battle - knows the terror and fear of the jobbing ordinary soldier - the importance of camaraderie - and can describe the fear on the eve of battle.  It's not for nothing that Aragorn tells his men, scared at venturing into Mordor for the final battle, that there is no shame in turning back, that he understands their concern.  It's not for nothing that Frodo never recovers from his injuries - mental or physical - that his fellow friends always feel separate and unappreciated. So much of fantasy literature focuses on great heroes and high colours and banners. Tolkien focuses on the ordinary man, and this film shows why.

I also enjoyed the film for the nostalgia it created in me. I suppose it's somewhat shocking to see how little things change, but I was also a scholarship girl at a private school, painfully aware of class privilege and the need to maintain one's financial aid.  I sat the same exams as Tolkien to get into Oxford and went to the college next door to his. The nervousness around college exams, the getting into trouble for seemingly petty violations, the mentoring by inspiring, exacting but eccentric dons - it all rang so true. And so thankfully did the establishment of lifelong friendships. It truly is a place out of time.