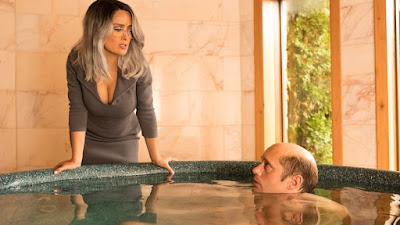 One of the film's I really wanted to see at last year's BFI London Film Festival but couldn't fit in was Canadian writer-director Kim Nguyen's THE HUMMINGBIRD PROJECT.  It stars Jesse Eisenberg and Alexander Skarsgård as super smart trader/techies who want to construct a straight-line pipe from New York to Kansas that will enable to trade milliseconds faster than their rival, played by Salma Hayek. The film's name thus comes from the tiny amount of time that can result in massive profits - the time taken for a hummingbird to flap its wings.

The resulting film is really odd, even for someone like me who works in the City. It's a very slow build. Jesse Eisenberg does his thing of arrogant smart guy, and that's become dull.  Skarsgård by contrast is playing against type - from hunk to bald programmer - and isn't convincing at all. And Hayek's is the hammiest, silver-wigged boss since Meryl Streep in THE DEVIL WEARS PRADA.  And yet, as much as I really wouldn't recommend this film, by the time I rolled into the final half it did build up a certain manic energy and tension, seeing Eisenberg push himself physically over the edge, and Skarsgård pulling off double-crosses.  There's a point at which Eisenberg is waving a chainsaw. Did it jump the shark? I honestly don't know. By that point the movie was operating on such a plan of surreality - completely unbelievable and yet bizarrely compelling.  I still don't quite know what just happened here.

THE HUMMINGBIRD PROJECT has a running time of 111 minutes.  It is available to rent and own.
Posted by Bina007 at 14:55