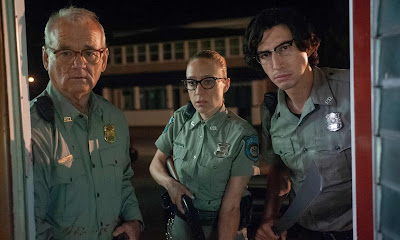 THE DEAD DON'T DIE is an unashamedly indulgent movie who's success relies on the audience wanting to be in on the joke.  I went along for the ride and found it to be uproariously funny, silly, shaggy and joyful - and hands down one of my favourite films of 2019.  This isn't a film for those over-obsessed with tight-plotting, consistent pace or an aversion to jump the shark moments. But as I said, if you go with the silliness, there's a lot of fun to be had.

The film opens in small town USA, reminiscent of original Twin Peaks. There are some slow-witted nice cops, played by Bull Murray, Adam Driver and Chloe Sevigny. And there's policing a dispute between Hermit Bob (Tom Waits) and MAGA-supporter Farmer Frank (Steve Buscemi).  There's pace is lackadaisical and their hearts decent.  It soon becomes apparent that polar fracking has caused the earth to move off its axis resulting in whacky daylight hours and a zombie apocalypse. The rest of the film sees how our heroes cope with the impending doom ("kill the head") - not to mention the newly arrived Scottish mortician with hardcore Samurai skills (Tilda Swinton).

We get lots of references to George Romero, including an update on his consumerist satire, as zombies wonder round in desperate search of wifi.  We also get a hopeful message about how "the children are our future". But mostly this is a film of supreme visual comedy - a shot of Adam Driver pulling into a diner parkway in a tiny red convertible Smart car - a shot of Tilda Swinton applying 1980s New Romantic makeup to a corpse - or a re-animated Iggy Pop hunting for coffee.

Any film is worth watching that gives us even one of those things. So yes, I get all the critics and I see the film's weaknesses but I just dont' care, because when it delivers it's absolutely hilarious!