KURSK: THE LAST MISSION aka THE COMMAND 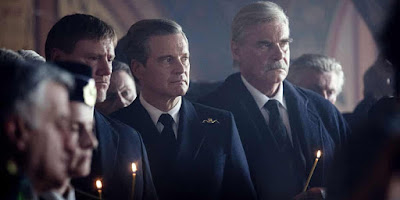 In the wake of watching and obsessing over HBO's superb CHERNOBYL I thought I'd check out thew new film by Thomas Vinterberg - KURSK: THE LAST MISSION aka THE COMMAND.  As with Chernobyl, it's a tale of tragic loss of life in a Soviet/post Soviet system that is riddled with poor quality equipment, poor maintenance, bad decision making, cover ups, and honest working class men betrayed by their superiors.  In this case, the men are submariners running a test exercise in the Barents Sea. This may be 2000, over a decade after Chernobyl, but it's a similar story - an initial accident confounded by an unwillingness to do the right thing immediately. The Russians don't have rescue vessels of their own, having sold them for hard cash (they were taking rich tourists down to see the wreck of the Titanic.)  And when the British and the Norwegians offer help, the Russians refused at first - an unforgivable delay.

Vinterberg's film is a straightforward and earnest affair.  He does well at capturing the claustrophobia and camaraderie of the submarine and Matthias Schoenaerts (Vinterberg's FAR FROM THE MADDING CROWD) is really superb as the charismatic protagonist. The film feels less authentic and more broad-stroke heroes and villains when it gets out of the submarine.  Max von Sydow is straightforwardly the bad guy as the Russian admiral who refuses help.  Colin Firth is straightforwardly decent and square-jawed as the British naval officer trying to help. It's a shame that the script doesn't quite allow for any convincing character building.