THE HOUSE WITH THE CLOCK IN THE WALLS 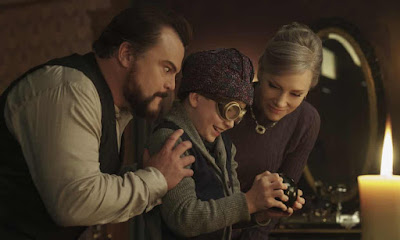 THE HOUSE WITH THE CLOCK IN ITS WALLS is a surprisingly entertaining and warm-hearted children's fantasy film based on the book series by John Bellairs, iconically illustrated by Edward Gorey. It's brought to the screen, again surprisingly, by R-rated film director Eli Roth, displaying a soft centre in this funny, handsomely made film.  It stars Owen Vaccaro as young orphan in the 1950s who goes to live with his eccentric uncle (Jack Black) in the titular magical house. Lewis' Uncle Jonathan and his neighbour/best friend Mrs Zimmerman (Cate Blanchett) teach young Lewis magic, with which he summons the ghost of his uncle's old enemy (Kyle MacLachlan). We then get a magical showdown that's really more about a profound lesson - that holding onto memories of our loved ones can go too far - that sometimes it's healthy to move forward.

The resulting film is genuinely funny and as improbable as it may sound, I really loved the banter between Jack Black and Cate Blanchett!  The movie is also beautifully designed. The house is filled with so many uniquely designed clocks, victoriana and gothic furniture, as well as sofas that act like puppies, and garden topiary that throws up!  The costumes are gorgeous - particularly those of the always immaculately put together Mrs Zimmerman.  Most of all, despite all the crazy special effects, this really is a movie that has a lot of heart, and none of its whimsy is unused or superficial. Lewis' wordplay, his love of the word "indomitable" in particular - is ultimately profound. And watch out for that Magic Eight Ball.

THE HOUSE WITH THE CLOCK IN ITS WALLS is rated PG and has a running time of 105 minutes. It is available to rent and own.
Posted by Bina007 at 17:32