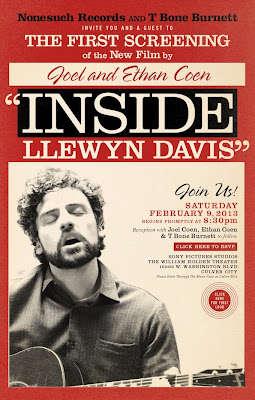 Oh man.  So here's the thing with the Coen Brothers.  Sometimes they write goofball comedies.  Sometimes they write movies that take you into dark existential angst. Sometimes they write movies that just take a decent guy and have the world beat up on him unrelentingly.  The last time they did that was in A SERIOUS MAN, which was perhaps the biggest downer of the London Film Festival that year, but was still, in its own way, a movie with a compelling narrative.  With INSIDE LLEWYN DAVIS, I'm not sure they've even given us that.  Nope.  INSIDE LLEWYN DAVIS is a fantastic soundtrack album masquerading as a deep and earnest film.  It's meant to be making the point that talent doesn't rise to the surface, that inane nonsense is popular, and that sometimes good people are so beaten down by life they become their own worst enemy out of frustration.  All that might have made a compelling film, but INSIDE LLEWYN DAVIS isn't it.  It's just a dull grey-green dirge - the colour of bruised skin - paced so slowly as to be funereal, in which we watch a man freeze and starve and struggle into submission, giving up on his career as a folk singer on the very night that Bob Dylan's career is about to take off.  Honestly, there's not much to like here other than the music.  They let John Goodman have a comedic cameo at around the half-way market to jolt us awake again, but other than that it's just a plain-chant dirge.  There's not even the characteristic fantastic cinematography, unless you count a moodily lit Llewyn singing on stage.  Just move along here, there's nothing to see.

The plot? Such as it is.  Oscar Isaac plays a folk singer called Llewyn Davis who lives on people's couches and can't quite seem to catch a break.  Everything he does turns to ashes.  He travels to Chicago in desperation, looking for an audition that bombs. He comes back to New York and decides to give it all up to become a merchant seaman again. But even that doesn't go well. And he ends up literally beaten up. That's honestly it - just spiced up by the John Goodman cameo and Adam Driver in an even smaller cameo as a nonsensical backing singer on an absurd song.

Maybe you think I've spoiled the movie for you? I promise you I haven't.  When you see Davis refuse royalties on the banal record for cash up front, we know it'll be a hit.  When you see him angrily tell his sister to throw out his stuff, we know it'll contain something he really needs.  It's just that kind of film.  This isn't the "sweet sad funny" picture I've heard described, but cinematic sadism.  It wasn't the best movie I saw that day, let alone the best movie at Cannes.

INSIDE LLEWYN DAVIS has a running time of 105 minutes.

INSIDE LLEWYN DAVIS played Cannes 2013 where it won the Grand Prize and London 2013.  It opens in France on November 6th; in Belgium, Germany, the Netherlands and the USA on December 6th; in Portugal on December 26th; in Mexico and Spain on January 3rd; on Greece on January 9th; in Italy on January 16th; in the UK and Ireland on January 24th; and on February 6th in Argentina and Denmark.
Posted by Bina007 at 23:46