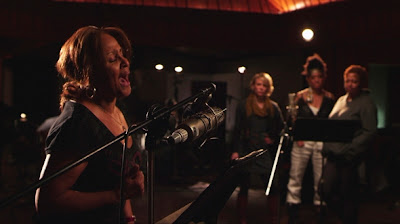 TWENTY FEET FROM STARDOM is one of the real gems of this festival: a music documentary that's fill of the joy of collaborating on music and that gives us insight into the unfairly hidden talents of background singers.  Veteran music documentarian Morgan Neville (CROSSFIRE HURRICANE) gathers together some of the most legendary singers you've never heard of: singers who have soul and depth and heft to hits from the Rolling Stones to Springsteen to Michael Jackson to just about very other major  act.  It's just amazing to see the Waters family sitting around their dinner table, talking about singing on the biggest selling album in history as well as the biggest selling movie in history but you'd never know them if you passed them in the street.

Where the documentary gets really interesting is when it discusses the evolution of the music industry, from soul to rock to autotuned American Idol stars.  And it also delves into the psychology and music industry shenanigans that keep some amazingly talented singers in the background.  Some, like Lisa Fischer, seem at peace with their lives:  others like Merry Clayton feel rightly hard done by; some like Darlene Love get a renaissance, and others like Judith Hill, are still struggling to cross those twenty feet.

The message this movie gives is that a lot of background singers just don't have the ego and the hunger and the luck to make it and that in some cases maybe that's a good thing.  But I couldn't help agree more with a retired former background singer who's now a preacher, when she argues that it comes down to self esteem and in too many cases, getting out from under an exploitative producer.  That was certainly the case for Darlene Love, who suffered the indignity of having Phil Spectre give her vocals to The Crystals.

I've always thought of myself as a fan of the Stones but I know that until today I never truly appreciated what went into producing the raw power on Gimme Shelter or so many other iconic tracks.  For that, I'm grateful to TWENTY  FEET FROM STARDOM for that, and, on a far simpler level, for just giving me ninety minutes of great, great music.

TWENTY FEET FROM STARDOM has a running time of 91 minutes and is rated PG-13 in the USA.

TWENTY FEET FROM STARDOM played Sundance, Toronto and London 2013. It opens in the Netherlands on November 28th and in France on December 4th.
Posted by Bina007 at 13:25