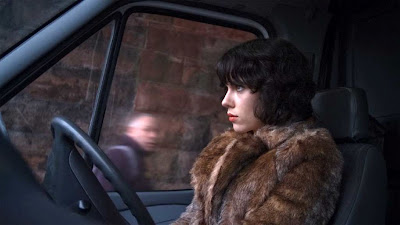 GRAVITY was a technically accomplished mainstream thriller - NEBRASKA a beautifully observed heightened slice of life - but with UNDER THE SKIN, director Jonathan Glazer (BIRTH, SEXY BEAST) gives us the first film of the film festival that is an unashamed art-house hit - a piece of cinematic genius that is utterly uncompromising and infused with surreal visuals, an engrossing soundtrack, wrapped around a mystery.

Based on the novel by Michel Faber, perhaps best known for his stunning The Crimson Petal and The White, Jonathan Glazer's film is less a straightforward adaptation than a movie inspired by the material. He casts Scarlett Johansson in her most challenging role - as an alien fembot sent to earth to lure in wayward men to their deaths. I know that sounds absurd, but by ground this alien, surreal concept in scrupulpusly realist photography, Glazer and cinematographer Daniel Landin (44 INCH CHEST) give the movie an air of mystery and peril that subverts any comic overtones in the concept.

The first hour is basically an alien procedural. Scarlett Johansson's character cruises around Glasgow in a van, screening man to find those alone, with no-one to alert the police. She picks them up, takes them to her house and then.....gosh! How to describe the switch from ueber-realism to the heightened surrealism we encounter there - of this alien women leading men into the mire in a brilliantly pure visual scape that's matched by Mica Levi and Johnnie Burn's haunting, sensual, strange soundscape.

The movie then takes a turn with the alien woman somehow jolted into amnesia about who she is, picked up by a well-meaning man, and led into what may be her first sexual encounter.  This freaks her out, and as the movie enters its final act, we see her pushed to an extreme of self-knowledge.  It's desperately sad, and shocking, and beautiful.

UNDER THE SKIN has a unique artistic vision and a profound understanding of how to situate the absurd in the real to make it credible and moving.  I am pleasantly surprised that Johansson would take such a role, in which she is compelling, but really this is Jonathan Glazer's film. It's about his artistic choices, particularly in the seduction scenes, and the collaborators he assembled to bring his truly unique and beautiful vision to our screens.

This movie should win awards, but it's so challenging and strange it probably won't.