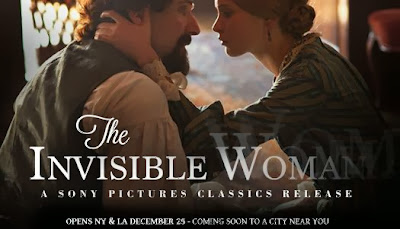 THE INVISIBLE WOMAN just doesn't work as a film at all.  It's a complete and abject failure, which is a tremendous shame as I have nothing but respect for the star and director, Ralph Fiennes.  His first directorial effort, CORIOLANUS, was a triumph of raw power and supple poetry.  It commanded you to watch.  By contrast, THE INVISIBLE WOMAN is so lacking in passion, so lacking in spark, it fairly lays upon the screen, squib-like.

The movie is a costume drama biopic romance based on the true story of the genius Victorian writer Charles Dickens and his late-life love affair with the much younter actress Nelly Tiernan.  That affair was the subject of scandal and notoriety in his time. The public perception was that Mrs Dickens, mother of many children, weary and perhaps grown banal, had been unfairly cast aside, and that in flaunting his relationship Dickens was being an utter cad.  He even went so far as to write a rather cruel letter to The Times claiming that the separation was amicable and denying the affair. As for Nelly, she has recently been the subject of a super book by Claire Tomalin, on which this movie is based.  Her motivations, and those of her family, are revealed to be nuanced and compromised.  How could a family living on the margins refuse the patronage of one of the most famous men of his time?  The book, and indeed the affair, raise interesting and provocative questions: did Nelly sleep with Dickens? If so was she glamoured by him or really in love?  How could a man who writes with such a burning sense of social justice, be so unjust to his wife in real life?  How far does love, if it was love, justify all?

Sadly the movie barely scratches the surface of any of these issues. In a pivotal scene, Ralph Fiennes' Dickens starts to explain his actions toward his wife (Joanna Scanlan) to his lover (Felicity Jones). She stops him, saying she doesn't want to know. But we, the audience, are desperate for any kind of insight into his motivations and mental state - which have remained obscure.  Dickens was superb at creating a public persona as a charming, youthful, playful man, and we never get beyond that here. The other major and massive problem with this film is that Ralph Fiennes and Felicity Jones have zero chemistry.  There is no physical or emotional spark.  We don't see why Dickens would have been captivated by this rather dull child, or why she would have been attracted to him, other than because she liked his novels.  We needed to see some erotic spark - some fascination - but there was absolutely nothing.  And without that, I'm afraid, there's just no movie at all.

THE INVISIBLE WOMAN has a running time of 111 minutes.

THE INVISIBLE WOMAN played Telluride, Toronto and London 2013. It will be released in the USA on December 25th and in the UK on February 7th 2014.