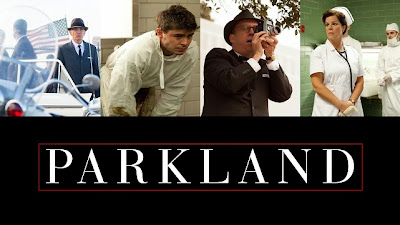 I'm the wrong person to give an objective review of Peter Landesman's JFK assassination drama, PARKLAND.  I'm a self confessed conspiracy nut, who went to Dealey Plaza a year ago and followed that visit up by reading Vincent Bugliosi's mammoth and scrupulously researched doorstop book, "Reclaiming history: The Assassination of JFK".  It's a hardback book so thick it reaches the same height as a litre tub of Haagen Dazs and that doesn't include the CD Rom of notes.  If you haven't heard of Bugliosi, he's the criminal lawyer that prosecuted the Manson family.  His book is born of passion and professionalism.  He thoroughly debunks all conspiracy theories about JFK, defends the Warren Commission report, and is scandalised at how the tragedy has been exploited and sullied by nefarious scandal mongers and publicity seekers.  It totally changed my view on the assassination and if you have a year to spare (!) I thoroughly recommend reading it.  This movie is based on what is basically the first chapter of that book: a scrupulously detailed account of the facts of what happened on the fateful day of the assassination up to the murder of Lee Harvey Oswald.  (It was also published as a separate and shorter book, "Four Days In September".) Naturally, when I realised it was being turned into a movie, and that in addition, that movie was being filmed by a first time director who was an actual proper journalist who shared my and Vincent Bugliosi's mission to reclaim the historical narrative, I was all over it.

Yes, it's fair to say that PARKLAND was the movie I was most excited about at this festival, and I wasn't disappointed.  To say that I loved it doesn't quite capture how I felt.  As we saw the presidential motorcade drive into Dealey plaza, I literally shivered.  When I saw Paul Giamatti's Abraham Zapruder plead with the editor of Life magazine not to publish the "kill shot" to preserve JFK's dignity, I cried.  When I saw the quiet decency of James Badge Dale's Robert Oswald, I was filled with empathy.  When I saw the selfish greed of Jackie Weaver's Marguerite Oswald, I felt physically sick.  I admired greatly Landesman's decision not to show the assassination itself, or indeed the Zapruder tape, but rather to show us the visceral reactions to it.  He held up to his promise of stripping away the conspiracies to restore the emotion at the heart of the story.  There was nothing salacious, or   prurient.  Even Jackie Kennedy's grief was handled with dignity.  It's as if the film-makers were trying to give her the privacy she deserved.

As a technical feat, the film is a marvel, seamlessly blending in archive footage with the recreations.  There's a particularly beautiful and moving scene in which we see the Zapruder tape reflected in Abraham Zapruder's glasses, but can see through to Giamatti's eyes, shocked, devastated. The use of handheld cameras gives us a sense of immediacy, chaos, fear. And centring the film on Parkland is a stroke of narrative genius. It's in that humble hospital that both JFK and Oswald were treated - the bookends of the film.  They were treated by the same junior doctors, played by Colin Hanks and Zach Efron, and the stoic nurse played by Marcia Gay Harden.  There are two very powerful symmetric scenes that show empty trauma theatres, blood on the floor, remnants of chaos.  There's a point being made about death the great leveller.

Like I said, I'm the wrong person to give an objective review of this movie.  I passionately believe in the project to reclaim the assassination from the conspiracy nuts: to centre it in procedural fact and real emotion.  I think Peter Landesman's movie has done this with a surety of purpose and complexity of style that is impressive.  And I hope the non fanatics will  benefit from that experience as much as I did.

PARKLAND has a running time of 93 minutes and is rated PG-13.

PARKLAND played Venice, Toronto and London 2013 and is already on released in the USA. It will be released in the UK on November 22nd - the fiftieth anniversary of the assassination.
Posted by Bina007 at 16:25