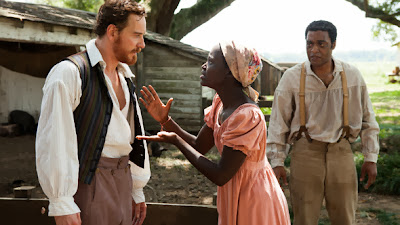 
Steve McQueen is a young British artist turned director whose previous two movies - HUNGER & SHAME - both gave us an unflinching portrait of dark and complex issues - the IRA hunger strikes and sex addiction. Both combined strong central performances from Michael Fassbender with stunning visuals and painfully held tableaux.  Both were the stand out movies of their year at the London Film Festival.

Accordingly, 12 YEARS A SLAVE came to the London Film Festival on a sea of hype - so much so that twitter had been filled with unblemished praise from critics who had seen the film that morning.  And even Festival Director Clare Stewart seemed speechless in her introduction to the film.  After the screening, the BFI tweeted pictures of standing ovations at the cinema. Everyone agrees the movie is moving, important and destined for Oscar glory.

I'm sad to say that I don't agree.  Yes, the film in important and unflinching. It's beautifully shot - all the more horrible to contrast the beauty of the Southern landscape with the cruelty of slavery. And yes, the movie hinges on a powerful central performance from Fassbender.  But too much of the rest of it seemed to me to be redundant, and a worse crime, to descend into emotional manipulation.

But let's start at the beginning. The film is based on the true life story of Solomon Northup, a successful free black man in Saratoga, married with children.  He was tricked into a business trip, captured and sold into slavery, first to a relatively benign slaveowner called Ford and then to a more complex sadistic coupled called the Epps.  Finally, he is freed when he manages to get a message out through a liberal white Canadian, although that reunion is tinged with bitterness at leaving his fellow slaves behind.

Chiwetel Ejiofor is said to have given the performance of his career as Solomon, and to be sure he has grace and power, but I personally prefer him in DIRTY PRETTY THINGS.  I do, however, hope that he wins awards for this because let's be honest, as a black actor, how many other starring roles of this gravitas is he likely to get?  In minor roles, I really liked American Horror Story's Sarah Paulson as the sadistic, jealous Mistress Epps, erging on her deeply troubled husband to whipping the slave, Patsey, that he seems to be sexually obsessed with.  I also rather liked Paul Dano as the classic nigger-hating plantation overseer Tibeats whose jealousy at the favour Ford shows Solomon leads to Solomon being chased off the estate. He brings real insecurity and violence to that role.  It's truly sinister.  But perhaps surprisingly, the one mis-step is perhaps the usually note perfect Benedict Cumberbatch as the nice plantation owner Ford. Admittedly, Cumberbatch has little to do in this rather thinly drawn part, but his Southern accent doesn't seem convincing.

For me, this film belongs to two actors - Michael Fassbender as the tortured Epps and Lupita Nyong'o's slave Patsey.  Fassbender brings layers of menace, vulnerability and borderline madness to his portrayal of the almost superstitiously religious man who has a bizarrely close tortuous relationship with his slaves that culminates in one of the most horrendous scenes of the film. Goaded by his wife, he cannot bring himself to whip Patsey so he forces Solomon to do it instead. This is psychosexual terror at its most devastating. As Patsey, Lupita Nyong'o is more than a match for Fassbender, bringing layers of pride and then terrorised desperation to her character.  It's a fine performance.

Behind the camera, Steve McQueen's usual austere framing is somewhat diluted here, in what is undoubtedly his most mainstream movie. The exception are two pivotal scenes of great power. The first is one when Tibeats has Solomon strung up, and the overseer leaves him there.  The camera stays on him in his suffering then pulls back showing us slaves, so fearful, that they have to continue their work around him. Then we pan round to show how close this hanging is to the main house, and to see the mistress of the house looking on almost lackadaisically.  It's a beautifully pointed scene.  The second is the forced whipping of Patsey that I referred to before, and then Epps taking the whip himself.  The detail is rightfully brutal.

So what stops this from being a great film?  Too long spent in the banality of Ford's plantation.  Too long spent away from Fassbender in general.  The rather absurdly drawn character of Bass, the liberal Canadian played almost like a salvation Jesus by Brad Pitt.  And the ending.  McQueen could have ended this film on the scene where Solomon leaves the Epps plantation - a close-up on his half-unbelieving, relieved and yet guilt-ridden face, as Patsey faints in the background. That would have perfectly summed up the conflict at the heart of this story of personal liberation.  Instead, he tacks on the standard schmaltzy scene of catharsis, where Solomon is reunited with his family - martyred apologies and group hugs all round. Conventional, unnecessary, sugary and ruinous.

12 YEARS A SLAVE has a running time of 133 minutes and is rated R in the USA.

12 YEARS A SLAVE played Telluride, London and Toronto where Steve McQueen won the People's Choice Award.  The movie will be released in the USA on October 18th, in Germany and Spain on October 31st, in Greece on December 12th, in Singapore and Sweden on December 20th, in New Zealand on December 26th, in France, Finland and the UK on January 24th, in Norway on January 31st, in the Netherlands on February 20th and in Denmark on February 27th.