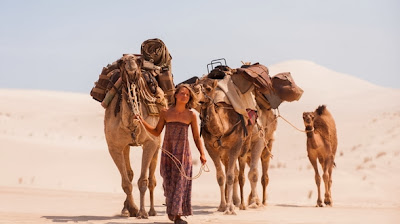 TRACKS is a rather lovely, beautifully shot movie depicting the true life journey of an Australian woman called Robyn Davidson who walked 2000 miles from Alice Springs to the western Australian coast.  She did this with three camels that she'd wrangled and trained, her pet dog, and occasionally the company of an aboriginal elder and a National Geographic photographer.  One might ask why and there are lots of hints at explanations on this film.  Maybe it was something to do with her own father's safari in Africa, or her innate loneliness, or of her bored dissatisfaction with life in the 70s.  Either way, I like that director John Curran doesn't feel the need to make everything obvious and easy, but allows us to see some of her charisma and mystery.

The film is beautifully made, and it serves as a hymn to he harsh beauty of the Aussie outback.  That said, any nature lovers should be cautioned that this isn't a movie that shies away from the harsh reality of nature, and animal lovers probably should give this film a wide berth.  In front of the camera, Mia Wasikowska carries the film as Robyn, and does a good job in making quite a prickly character interesting and sympathetic. Adam Driver, who seems to be popping up everywhere at the moment, is also highly enjoyable as Robyn's photographer cum suitor - the guy who has to reconcile, as we do, Robyn's need for solitude and her intense loneliness.  Ultimately, though, this isn't any actor's film.  It belongs to the cinematographer Mandy Walker who captures the stunning landscapes and people of the outback.

TRACKS has a running time of 110 minutes.

TRACKS played Venice, Toronto and London 2013 and does not yet have a commercial release date.
Posted by Bina007 at 14:30