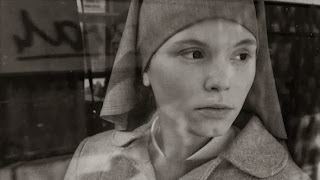 Pawel Pawlikowski’s IDA is surely one of the most beautiful and most powerful movies at his year's festival.  It tells the tale of a young novice nun sent to visit her only living relative on the eve of her ordination.  This shy austere girl is confronted with her wonderfully direct, blowsy aunt, who immediately reveals her true heritage.  The novice Anna is really a jewess called Ida, her identity hidden in a 1960s Poland still struggling to confront its role in the Holocaust.  What then follows is a journey into the tragic past of Ida's parents - journey that begins with her denying that she is even Jewish and ends with her exploring who she really is, and how she really feels.

There's so much wisdom and insight in this film: about how we deal with pain and knowledge and the frailty of human nature.  And yet it's all wrapped in an almost austere, simple plot and deceptively beautiful visuals.  Cinematographer Lukasz Zal creates these wonderful black and white tableaux against which the two lead actresses emote with layers of nuance to every line. Sometimes a good movie really is just as simple as a unique and dramatic plot, two amazing actresses and a guy who knows how to bring poetry to the screen.

IDA has a running time of 80 minutes.