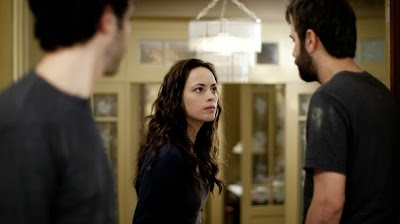 Iranian director Asghar Farhadi's THE PAST is a movie that is in desperate need of Harvey "Scissorhands" Weinstein to cut down its over two hour running time into something less frustrating. But even then, one suspects that it's contrived and ultimately uninteresting plot would remain problematic. And of all the performances in this tense relationship drama, I am flabbergasted that the Cannes Jury chose to reward Berenice Bejo, who I found to be ordinary in the extreme.

The movie is about guilt and the complexity of modern relationships.  As it opens general all-round nice guy Ahmad (Ali Mosaffa) arrives in Paris to finally divorce Marie (Bejo). He arrives in a cluttered ramshackle house, symbolic of the cluttered ramshackle relationships. There are assorted children - it takes us a while to figure out who their parents are.  It turns out that the elder daughters, Lucie and Lea belong to Marie by a marriage previous to Ahmad, and the little boy Fouad, belongs to Marie's new lover Samir (Tahar Rahim).  But Samir is not yet free - his wife is in a coma.

The resulting movie is full of bitterness, guilt and recrimination.  Who is responsible for failed relationships?  How are the children fairing?  Only Ahmad provides a still moral centre as the other characters whirl around him.  He tries to unpick the source of the tension and the final hour of the film plays a bit like a he-said-she-said mystery of the most melodramatic kind. It tends to melodrama, and after so many twists and turns we begin to lose sympathy, undermining all the good realistic acting and camerawork in the first hour.   Ultimately, the movie becomes so entangled in itself, and Samir and Marie so self-involved that the experience becomes alienating - and a far less engrossing and artistically pure work that Farhadi's beautiful A SEPARATION.

THE PAST has a running time of 130 minutes.

THE PAST played Cannes 2013 where Berenice Bejo won Best Actress and Asghar Farhadi won the Prize of the Ecumenical Jury.  It also played Toronto and London 2013. It opened earlier this year in Iran, the Netherlands, Poland and Greece. It opens on November 29th in Finland, on December 5th in Serbia, on December 19th in Italy, on December 20th in the USA, on December 25th in Norway and on February 7th in Sweden.
Posted by Bina007 at 20:00