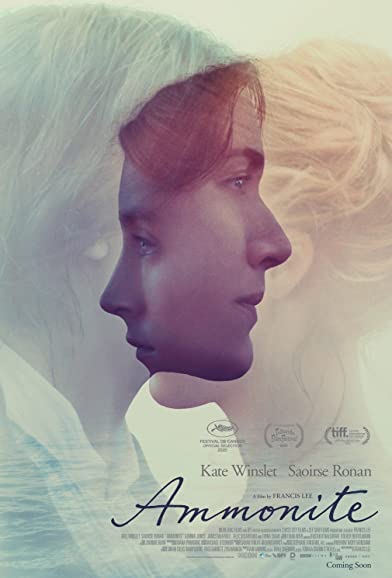 AMMONITE suffers in my head from comparisons with the devastatingly brilliant PORTRAIT OF A LADY ON FIRE, which played at last year's festival and has a very similar story at its heart. In both cases a young girl trapped in either the reality or prospect of a loveless and controlling marriage meets a talented older working class woman with a professional skill.  In both cases, the meeting takes place in a geographically isolated and brutally beautiful place and the relationship that builds is a slow-burn to a physically passionate end.  But in the latter, I truly believed in the connection between the two women, and in the former I'm not sure I did.
Part of the reason for this is that it was 50 mins for the protagonists in AMMONITE to have an actual (if insubstantial) conversation and 1hr10m for them to have a kiss.  And the interest in the characters is deeply asymmetrical.  Kate Winslet's Mary Anning IS fascinating. She's so repressed and locked in - maybe as much by her consciousness of her poverty and working class status as by her homosexuality - and has a fierce pride that refuses to accept help.  By contrast, Saiorse Ronan's Charlotte is the typical silly Victorian woman, fit for nothing but to be admired for her beauty. This is not to victim-shame, but she is exactly the product of societal strictures and doesn't really display an inner life in the way that PORTRAIT's young woman does. There doesn't seem to be much under the surface.  I had the feeling in AMMONITE that I always get watching Brideshead Revisited. I can understand why Charles is fascinated by Sebastian but not why Sebastian wants to hang out with Charles!
So the relationship develops and is crystallised at a beautifully staged elegant supper party where Charlotte is immediately embraced by the ladies, and Mary is left sitting excluded at the back, full of jealousy and surprise at just how much she resents them taking *her* girl away from her. We then move to a hyper explicit sex scene.  Now, it's really great to see a no-nonsense depiction of lesbian sex on screen, but it did feel strange in a movie where so much is repressed and withheld. It just felt tonally jarring rather than a cathartic release and a meeting of bodies and souls.
On the positive side, this movie looks and sounds ravishing. The costumes and way in which Lyme Regis is depicted is as austere and fierce and unique as Mary, and the sound design batters our ears with gales and tides that hint at what Mary feels under her still surface.  The acting was also top notch as one might expect,  with Winslet giving a masterclass in facial acting where there is no dialogue.  I also loved the Fiona Shaw character Elizabeth and wanted to see more of her, because I feel so much of Mary's characters reticence is due to class rather than queer concerns and that plays into their former relationship. I also love that because Charlotte is so worldly she has only experienced love as a kind of material possession and so when she falls for Mary she also expresses that with a kind of material possession. Just as she, as a wife, was expected to be subsumed without objection into her husband's world, she now expects that of Mary.
I also love how male a space the British Museum is, and the power of these two women at the centre of it at the end - as though the director Francis Lee (GOD'S OWN COUNTRY) is finally re-centring women in British history. Here is a woman who's name is not mentioned on the fossil that's on display at the Museum, but she can reclaim it visually in this film. Truly, it has been a long time coming.
AMMONITE has a running time of 120 minutes and played Toronto and London 2020.  It opens in the USA on November 13th.
Posted by Bina007 at 09:25