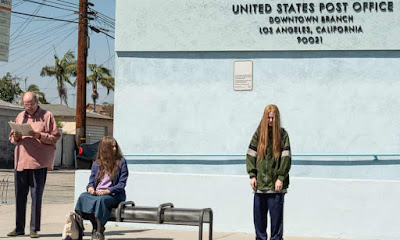 Miranda July's third feature is everything I have come to expect and love - a kooky, quirky almost surreal comedy that contains at its core such deep love and earnest humanity that it can make you cry.   I truly understand why this film gets as many one-star ratings as five-star raves:  it lives in the same rarified space as films by Michel Gondry and Charlie Kauffman and it's clearly not going to be to everyone's taste. All that I can say is that I laughed out loud for pretty much all of it - and that I got deeper into it I was so invested in its lead character that I could've cried tears at the ending.  This film moved me, and its characters will stay with me.  I keenly want to know what happens next.
The film opens on a family of grifters, robbing mail boxes to pay the rent on their weird office beneath a bubble factory, whose overspill bubbles they are in charge of cleaning up.  The dad, played by Richard Jenkins, is a kind of goofily charming but increasingly creepy scam artist who seems to have a rather nasty hold over both wife (Debra Winger) and daughter. And the key story here is how the twenty-something year old daughter (Evan Rachel Woods) breaks out of the infantilised and yet loveless relationship with her parents by a chance encounter with a pretty woman called Melanie (Gina Rodriguez).  Melanie is our way into the movie. She comes from a normal, real world, albeit with an oppressive mother she's trying to escape. The way in which she's fascinated and entranced by her new friend allows us to find her strangeness endearing too. And in a sense, while Woods and Winger are giving the most mannered and big performances, it's Rodriguez who has the hardest job in playing the straight man.

I found the slowly building relationship between the two women utterly beautiful and the emotional catharsis as Woods' Old Dolio believes she has endured The Big One to be a thing of real joy.   How can the simple passing of a toothpick across a table break your heart? This is what Miranda July does. And it's a strange kind of emotional genius.

KAJILLIONAIRE is rated R and has a running time of 104 minutes. The film played Sundance and London 2020.