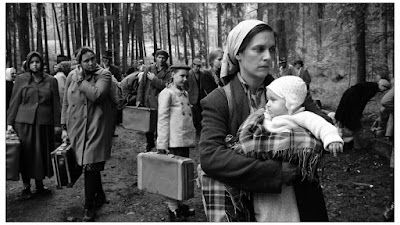 Bohdan Slama's SHADOW COUNTRY is a devastating film insofar as it unblinklingly depicts the true pettiness, violence and bigotry at the heart of humanity, regardless of whether one has lived cheek by jowl with ones neighbours for decades.
The entirety of his film takes place is a small village which is perhaps Austrian, German or Czech depending on which country is invading the other.  As a result, its inhabitants are a rich cultural mix of ethnic Germans, ethnic Czechs and Jews.  In such a place, the language one chooses to speak in becomes a political act and an ethnic or nationalist declaration. And with Nazis, Czech patriots and Soviets in power at various times from the 1930s to 1950s, allegiances shift under the exigencies of survival.
As the movie opens, the Germans are taking over.  One of the scenes that affected me most deeply was a peasant woman saying very simply that if she agrees to speak German it could mean a bigger allotment: she's not political, she just wants to eat. Of course others take a more proactive role in enabling the Nazis, with the mayor becoming Reich's Commissar, and a willing woman taking a Nazi to bed. One of the most moving stories is of a Czech man who has married a Jewish woman. He is asked to divorce her and refuses.  She and her father are murdered in the Holocaust and he barely survives a concentration camp. Returning to the village, he is seen as a kind of community hero, but he's so deeply embittered and vengeful that he stands by while the partisans round up and summarily massacre the Nazi collaborators.
Apparently this was a common occurrence in post-war Czechoslovakia, where there was no firm rule of law, and no-one knew who was in charge.  And this film shows very clearly and convincingly how it could happen that people turned against each other in vengeance.
The result is a film that is absolutely engrossing and horrifying and yet also provoked empathy and sympathy in the most unlikely of situations.  It really forces us to ask what we would do in such circumstances.  It reminded me somewhat of the iconic German TV show Heimat, which also focusses on the impact of war on a small town and at the individual level, and which was also shot in black and white.
SHADOW COUNTRY has a running time of 135 minutes. The film is currently playing the BFI London Film Festival 2020. It does not yet have a commercial release date.
Posted by Bina007 at 22:00