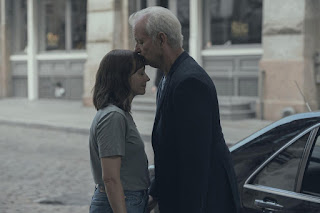 Laura is a thirtysomething young mother whose husband is always travelling with work. Her life has been subsumed by getting the kids from A to B, and as much as she loves them, she's struggling to create the mental space to focus on writing her new book. Even worse, rather than having a rich inner intellectual life, she's stuck listening to other mums complain about their dating lives.  And even when Laura's husband Dean does coming home from yet another travel trip, he's exhausted, she's exhausted, the conversation gets mired in the bureaucratic minutiae of family life.  Things hit a tipping point when Dean drunkenly starts having sex with Laura but pulls back when he realises it's her. And then she finds his hot colleague Fiona's beauty kit in HIS suitcase. Is he having an affair?
Laura confides in her father Felix who argues that Dean probably is having an affair, because heck, that's what men do.  Felix seems to relish spending time with Laura as they tail Dean through New York and even to Mexico to uncover evidence of his misdeeds. And all of this makes for a hilarious buddy comedy that could easily serve as a prequel for a detective duo TV show. Rashida Jones (Laura) and Bill Murray (Felix) have real chemistry and it's just an absolute blast seeing them slope around Manhattan together in his absurd red sports car just being charismatic and witty and rogueish in that Bill Murray way. And we also get a side order of comedic genius from Jenny Slate (LANDLINE) as the hilariously self-involved school mum.
But there's so much more going on in this film. It's almost as if Bill Murray is back in THE ROYAL TENENBAUMS but this time he's playing the Gene Hackman role.  Laura's willingness to suspect her husband of infidelity is clearly coloured by being raised in a broken home. Likewise, her father's willingness to think Dean is cheating is coloured by his own predilections.   It's clear that Laura feels lost and hurt.  But is any of that her husband's fault?  Or is this just motherhood damaging her sense of self, and thus self-esteem.  And is that lack of self-esteem in her marriage bringing up issues around her own childhood and her father's infidelity.
So, from my perspective, this film isn't about whether the husband cheated or not at all. And that's why the Marlon Wayans character, Dean, is so vacuous.  We actually don't care about him, and maybe neither do the lead characters. In the words of Laura, "what if I'm just in a rut?" And also paraphrasing from Laura, what if her dad just wants to spend more time with her?  And from writer-director Sofia Coppola (THE BEGUILED), maybe the shadow Laura is trying to move out from under isn't that of motherhood but her larger-than-life dad?
ON THE ROCKS is rated R and has a running time of 96 minutes. It is streaming on Apple TV+.
Posted by Bina007 at 15:39