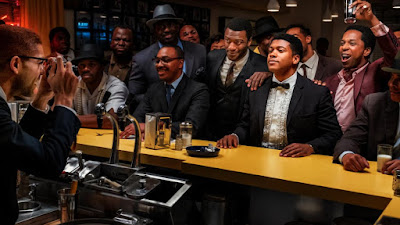 ONE NIGHT IN A MIAMI... is a film that is transparently an adaptation of   s stage play.  Short of a couple of boxing matches at the start, almost the entirety of the film takes place in a crappy motel bedroom, where four powerful famous black men discuss how best to advance civil rights.  As a result, debut director Regina King (Watchmen) has little opportunity to show her visual flair.  But where  she excels is in casting her four protagonists and extracting performances of real force.
As the film opens, we think it's going to belong to Muhammad Ali, as played by Eli Goree (Riverdale). He has the physicality and the speech pattern down pat in a way that Will Smith never did, and that has me begging for a full on biopic. But back to this film, it starts with Ali defeating Henry Cooper and then Sonny Liston against the odds.  He's on the cusp of converting to Islam and rejecting his slave name. But as the film will show, Ali's mind is already made up. He has already decided to become a civil rights activist thanks to Malcolm X's tutelage. So there's no discussion to really be had, other than a rather embarrassing admission from Malcolm X that he's about to leave the Nation of Islam because of its corruption.
Neither does the film belong to NFL player and wannabe actor Jim Brown (Aldis Hodge - THE INVISIBLE MAN).  He's the least famous of the four, his mind is also basically made up to leave the NFL and pursue acting, but he also seems quietly impervious to Malcolm X's recruitment drive.
No - this film belongs to Sam Cooke and Malcolm X and the long intellectual argument they are going to have with each other about how to advance the black cause.  As played by Kingsley Ben-Adir, Malcolm X is a far more familial, kindly and quiet character than Denzel Washington's version. In fact, it comes as no surprise that he played Barack Obama in The Comey Rule.  He castigates Cooke for playing in the South and spending his life drinking and having fun on the West Coast, as if he can somehow outrun racism. But Cooke has an equally powerful argument about the end justifying the means: after all, if the Nation of Islam wants the black man to be proud and economically independent, hasn't Cooke achieved just that?
Leslie Odom Jr. (Hamilton) OWNS this film as Cooke.  The way in which he holds in his anger at Malcolm X's condescension is just masterful, and then when he finally lets rip his argument it's powerful and impressive. But there is nothing more impressive in the film that Cooke appearing on the Johnny Carson show at the end, and giving a performance of A Change Is Gonna Come. Not only does his voice match the silky power of the real Sam Cooke, but the emotion he brings to it destroys you.  Maybe that's because while the stakes of this film couldn't be higher, we are painfully aware that two of the four protagonists aren't going to be alive more than a year later. That all this talent and justified anger and desire for change was so stupidly wasted is as crushing as realising that the change that Cooke sheds a tear for has not yet occurred, 56 years later.
ONE NIGHT IN MIAMI has a running time of 111 minutes. The film played Venice, Toronto and London 2020 and will be released on January 15th 2021.
Posted by Bina007 at 14:00