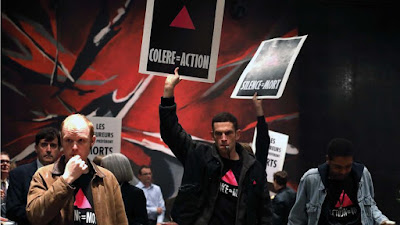 To deal with the latter part first, we open up the movie at a weekly ACT UP Paris meeting where an old hand explains the concept of ACT UP and how the meetings work to four new joiners.  This is evidently just for the audience's benefit and is very heavy-handed. We get this intermittently all the way - this or that drug remedy explained.  And I have to admit that while it was fascinating to see the first ACT UP action, I didn't really need to see them debate again and again with the apparently evil drug companies.  After all, it felt to me that it was the regressive social forces in France that were more to blame for Mitterand's failure to act. And even more frustrating and depressing, it wasn't clear from this film at least that ACT UP achieved anything other than provide each other with a sense of community and support.

All of this is irrelevant though because the love story at the movie's heart is so beautifully acted, and genuinely affecting rather than cheaply emotionally manipulative.  It's the story of a young boy called Sean who catches HIV the first time he has sex. When we meet him he's courageous, and proud and active and vital but as we see him move through the film he becomes increasingly sick with AIDS.  We watch him fall in love with Nathan and Nathan become his full time carer. And as their story moves to its inevitable conclusion the power and weight of its conclusion becomes almost unbearable. I didn't cry as much as I did in STRONGER, but the weight of emotion is still with me and will take some time to process.  Kudos to all involved but especially the actor playing Sean - Nahuel Pérez Biscayart - he deserves all the awards.


120 BPM has a running time of 140 minutes. It is rated 18 for strong sex, nudity, sex references, language. The movie played Cannes 2017 and won the Fipresci Prize, the Queer Palm, the Grand Jury Prize and the Francois Chalais award. It also played Melbourne, San Sebastian, Toronto, New York and London. It was released earlier this year in France and Italy. It opens in the USA on Oct 20th, in Sweden on Dec 1st, in Bulgaria on Jan 26th and in the UK on April 6th.
Posted by Bina007 at 16:16