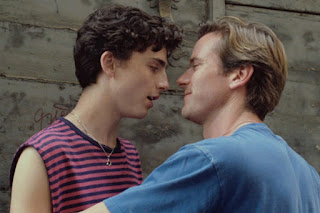 CALL ME BY YOUR NAME has two problems that I couldn’t get over. In fact, even more than that, I had a miserable and difficult time watching this film - even though it was one of my most anticipated and by one of the most exciting directors working today - Luca Guadagnino. The first problem is its length. I kid you not, but basically nothing happens in the first hour of this film. A pretty arrogant and self-indulgent middle-aged man called Oliver (Armie Hammer) arrives at an Italian villa owned by an academic (Michael Stuhlbarg) he’s working with. There seems to be an antipathy between Oliver and the professor’s teenage son, Elio and each of them seems to be flirting with girls about town. As we move into the second hour of the film it becomes clear that the antipathy is of the kind one might see in a playground where kids pretend not to really like the girl or boy they actually like. Oliver pulls back from taking the flirtation further but actually teases Elio by suggesting trips to town together and initiating physical intimacy. The messages are mixed but Oliver clearly knows that the relationship would be seen as wrong. He cites this as a reason to pull back.

And this is where we get to the second problem with the film: the casting of Armie Hammer. For a start, he can’t match the acting ability of Michael Stuhlbarg (magnificent in his one big scene) or indeed newcomer Timothée Chalamet as Elio. When the father generously calls Oliver good, and the relationship meaningful, I just sat there wondering how he’d got that from the flaky, selfish  (and apart from one opening gambit to show his intelligence, not conspicuously smart or interesting) personality I’d seen on screen. A related issue is that while in real life Armie Hammer is 31, for me he looked a lot older than that. And that gave the relationship a pretty nasty feel to it - one of uneven power, grooming and exploitation. I feel that Guadagnino really messed up with his casting and should’ve gone for someone who actually looked like a mid-20s post-doc, and a kid who looked a more mature 17 then a 14/15. And I’m pretty amazed that audiences haven’t screamed louder about this. I wonder if the critical reaction would’ve been as warm if this had played out between an old man and a 15 year old looking girl. It left a very bitter taste in my mouth indeed.

Meester Phil's points to other issues with the film although he didn't find age to be such an issue:  he found the pacing uneven - that the film somehow didn't cohere or feel credible to him. As a result he wasn't emotionally involved.

So, for those looking for a truly beautiful gay love story, and one that isn’t shy about explicit sex either, then check out 120 BPM and leave this behind.