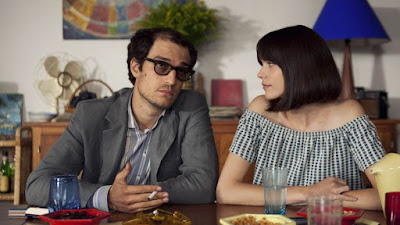 Michel Hazanavicius’ REDOUBTABLE is not so much a full-scale biopic of Nouvelle Vague auteur Jean-Luc Godard but a portrait of his three year functional marriage to actress Anne Wiazemsky, 17 years his junior, in the late 60s. As the age gap would suggest this is not so much a marriage of equals as one of an acolyte and an over-bearing demanding selfish man, although she is genuinely in love and can't see it at first. As the film opens, Godard discourages Anne from acting, calling actors jumped up fools, and encourages her to go back to university for a proper "political education". What does he mean by this? Why, that Anne should adopt the same Marxist revolutionary views that he has.

All goes well enough until the 1968 General Strike. It was a volatile period where workers were protesting and Parisian students had also basically shut down the City.  Godard goes to Cannes and with a bunch of other directors has the festival shut down too - something I have some sympathy with - there is something a little absurd, after all, about showing rom-coms and dramas when France is on the verge of revolution. But of course, Godard takes it too far. He demands that other directors and his wife sacrifice opportunities according to his political demands, and viciously mocks those who have the temerity to disagree with him. He puts down his wife in public, embarrasses her with his radical and anti-semitic views, and then goes into a massive sulk when she takes on a film role in Czechoslovakia, culminating in what I think should never be described as a selfish act, but in this case clearly is! - a suicide attempt.

From my description of the events of this film, one would think it was a remarkably grim watch. But it isn't! To be sure, Godard is a massive arsehole with some really offensive views, but the way in which Havanacius portrays this is so witty and inventive that it was still a great watch.  In particular, the director juxtaposes the serious dramatic action with bright coloured costumes and sets and merry music - one of my favourite scenes has a car packed with people viciously arguing set to a jaunty orchestral version of Perry Como's Magic Moments.  Another great scene has Godard trying to shame his wife into refusing a film role that contains a lot of nude scenes, and that scene is shot with both actors unnecessarily nude.  There are so many great moments like this that I can honestly say that this is a truly funny film. I also want to gives special praise to Louis Garrel in his best role since MOTHER as Godard. He goes the whole hog, creating a fake bald patch, wearing those specific glasses, and adopting the Godard lisp.  It's a great performance because it's simultaneously funny, knowing, obnoxious and sad - for example, I never once doubted that Godard loved his wife, it's just that he's also a selfish misogynist too.

Overall, REDOUBTABLE is a must watch for cineastes and for wider audiences it will resonate as a portrait of a marriage of unequals, of verbal abuse, but also a film of immense wit and humour: a surprisingly fun watch.

REDOUBTABLE has a running time of 107 minutes. The movie played Cannes, Toronto and London 2017. It opened in France and Israel earlier this year.
Posted by Bina007 at 16:34