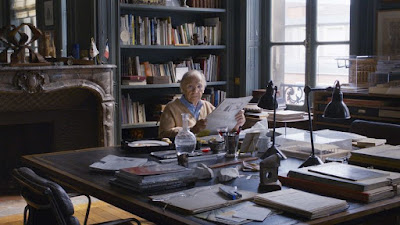 Meester Phil and I walked out of HAPPY END after an hour of tedium and inanity.  Advertising blurb suggesting it's a sharp satire of contemporary French financial and racial inequality in the shadow of the Calais migrant camp was wildly overblown. There's a rich family. It includes Isabelle Huppert. They run a construction company. There's a feckless grandson who may or may not inherit the company. There's a granddaughter who's mum just attempted suicide. There's a little baby who's shot on an iPhone with text messages indicating her train of thought. What there isn't is drama or meaning or any kind of coherence.  In fairness that might have all been resolved in the final 45 minutes but life's too short to find out.