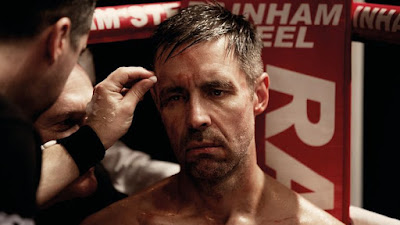 JOURNEYMAN is a banal, thin, waste of time. A movie that says nothing new about boxing and adds little to the "Lifetime movie of the afternoon" genre that we haven't seen in rehab movies like STRONGER or MILLION DOLLAR BABY.  The direction is workmanlike, the scope narrow, and really the only reason to watch it is the characteristically good performance by Jodie Whitaker in one of the lead roles.  Paddy Considine plays a local hero boxer who gets punched into a coma in his One Last Match.  When he comes round he's frustrated, violent, and his wife (Whitaker) leaves him with their baby. His lovely friends who'd abandoned him then step in. By the end, everyone's back on side because, hey, they're all basically lovely people.  There's no dramatic tension. There's no real character development.  The boxing scenes don't work. The love story is so predictable it's frustrating.  And there isn't even any criticism of a sport that serially harms people.   I honestly don't know why this has been described as a tearjerker.  Frankly, Considine's performance is a series of physical ticks that was one stutter short of Simple Jack. This is a crashing disappointment after Considine's fantastic directorial debut TYRANNOSAUR - a movie of great artistic ambition and impressive execution.
JOURNEYMAN has a running time of 92 minutes. It is rated 15 for strong boxing violence, infrequent strong sex. It will be released in the UK on March 30th 2018.
Posted by Bina007 at 00:06