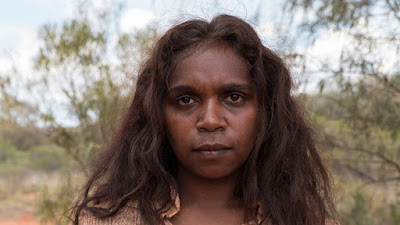 SWEET COUNTRY is a film of power and beauty that knocked me for six and took a while to digest. It stands as one of the best films of this year's LFF, and certainly one of the most important.  It contains a unique directorial vision, a unique true story, and provocative questions for all of us at this time of heightened fear of the Other.

The film is set in post-World War One Central Australia, on a series of small cattle farms. The hero is an aboriginal cattle farmer called Sam Kelly (Hamilton Morris), a decent man who works for another decent man, station owner Fred Smith (Sam Neill). Unfortunately, their oasis of mutual respect goes against the prevailing tide of racism and injustice in this wild frontier.  A newly returned solider (Ewen Leslie) manipulates Fred into lending him Sam, his wife and niece, to work for him for a few days.  This good turn sets in motion a series of events that culminate in Sam shooting the white man in self-defense and going on the run.  Act Two sees Sam and his wife being chased down by the local lawman (Bryan Brown) and Act Three sees him face whatever justice a black man can get in 1920s Australia.  To say more would be to ruin the plot.

There's so much to admire in this film that it's hard to know where to begin. To state the obvious, the director Warwick Thornton (SAMSON & DELILAH) has a unique interest in bringing Australia's alternative history to the screen - in showing the violence and exploitation that doesn't show up in textbooks. Instead of Aussie folk hero Ned Kelly he wants to give us  a true indigenous hero - Sam Kelly - and he wants to ask us if he'd fair any better in the justice system today.

But the great and wonderful thing is that Warwick Thornton's projects are so much more than just pedagogical. He has a really unique directorial vision. For a start, filming this story as a western allows him to tell us something about the wild frontier (in)justice at this time.  Second, he makes bold choices, all of which seem to pay off.   I loved his use of quick flash-backs and flash-fowards to add nuance to his characters and build suspense for the audience.  For instance, the ostensible bad guy in the movie is basically a racist bully, but he's also a very traumatised war veteran who's self-medicating with a lot of alcohol. I also loved the equally bold choice to have no musical score in this film, but to really ramp up the tension by focusing on the sound of every footstep, locked shackle and cocked rifle.  But most of all, I just love the visual vastness and harsh beauty of the landscapes as a context for this very small-scale human tale - with these people quite simply dwarfed by greater forces - whether nature or institutional injustice.  There's a deep humanity to the tale - and Hamilton Morris' performance in particular.  And I can't think of anything more chilling than Sam Neill's final line in the film.

SWEET COUNTRY has a running time of 110 minutes. It played Venice, Toronto, Adelaide and London 2017. The film is rated 15 for strong violence, injury detail, violence and racism as a theme.
Posted by Bina007 at 23:54