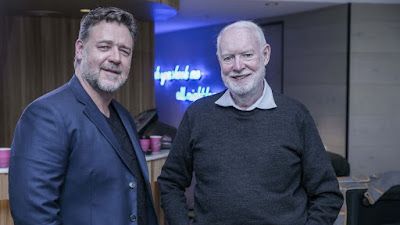 Director Sally Aitken's DAVID STRATTON: A LIFE IN CINEMA is one of those films that makes you fall in love with cinema all over again.  It's a must for cinephiles and especially for lovers of Australian cinema.  I must confess, however, that I sat down to watch it never having heard of the titular film reviewer. But it turns out that he's actually something of an icon - the Aussie Roger Ebert, say.  He started out living in England, before moving to Australia, and discovering his adopted country through its cinema. Obsessed with movies, he realised he could watch films for free if he volunteered as an usher at the Sydney Film Festival. He then worked his way up the be the festival's director for many years, before working as a critic for Variety, and then hosting a hugely popular and influential TV review show in Australia. Even now his passion for cinema is undimmed, and he teaches a seemingly never-ending class on world history at Sydney university.

The still-English accented Stratton takes us through his life and the development of Aussie cinema by highlighting movies that he thinks are exceptional but also personally important to him.  So we get Aussie classics like PICNIC AT HANGING ROCK and recent films like MURIEL'S WEDDING by way of fan favourites like STRICTLY BALLROOM.  But he also subtly teaches us about the first time we saw an Aussie female director, or Aborigines take lead roles, or when Geoffrey Rush was the first Aussie to win an acting Oscar for SHINE.  He takes us through the Ozploitation trend and into the birth of arthouse cinema. And we even learn that the first ever feature film in the WORLD was an Aussie film about the Kelly gang.

What I loved about this film was seeing actors and directors from Peter Weir to Nicole Kidman to Russell Crowe to David Michod discussing their films with Stratton - the insights and the debates. The most controversial of these is over the white supremacist film ROMPER STOMPER, starring Crowe, that Stratton thought was well made but actively dangerous.  The director hasn't gotten over the slight but Crowe is surprisingly gracious.  We also see Stratton change his mind over the Aussie classic THE CASTLE.

Having watched this film, I desperately want to buy a compilation of Stratton's written reviews, to sit alongside those from Sarris, Kael and Ebert. He seems like such an insightful, historically literate critic.  This documentary has also given me a list of Aussie films recommended by Stratton that I can't wait to watch. To that end, it's a great doc insofar as it has deepened my understanding of old favourites and provoked a hunger to get to know more about Australian cinema.

DAVID STRATTON: A CINEMATIC LIFE has a running time of 97 minutes. It played Cannes 2017 and opened earlier this year in Australia. There are still tickets available for both screenings at the BFI London Film Festival.
Posted by Bina007 at 19:49