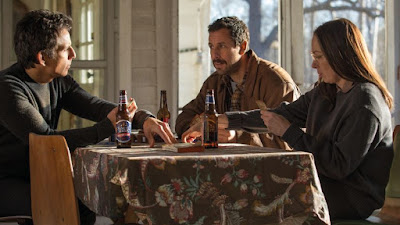 In a London Film Festival where the prevailing tone has been one of a wake, in the words of Meester Phil, "Thank god for some wit and arseholery." The arsehole in question is paterfamilias Harold Meyerowitz (Dustin Hoffman with a raffish beard), a retired sculptor full of passive aggressive nastiness and jealousy. On the last of many marriages, Harold lives an indulgent life bitter that his supposedly less talented peers have achieved more commercial success, and demanding that his three children dance to his needs. The eldest is his son Danny (Adam Sandler) - an utterly charming but insecure man who has been constantly overlooked in favour of Harold's younger son Matthew (Ben Stiller), who is far more successfully financially and seems to have discovered a better way of dealing with his father. And then poor Jean (Elizabeth Marvel) is so overlooked that her grievances with her dad taking a back seat and comically inserted in parenthesis.

The film is, then, a very darkly comic one.  There are properly laugh out loud moments to be sure - but the tone is bitter and tragic. And this is where the casting is absolutely spot on. I love it when Stiller and Sandler play straight roles because there's a certain manic comic energy underlying it. And when they ARE called upon for their slapstick chops, the payoff is all the better for the surrounding dark context. If I have any criticism to make, it's that the film felt over-long and occasionally lost momentum.  I felt that this was particularly the case in the scenes involving Harold's fourth wife Maureen (Emma Thompson).  Nothing wrong with her performance at all, it just felt a bit redundant. Otherwise this was a truly superb film as one would expect from a Noah Baumbach picture.

THE MEYEROWITZ STORIES has a running time of 110 minutes and will be released on Netflix on October 13th.
Posted by Bina007 at 16:00