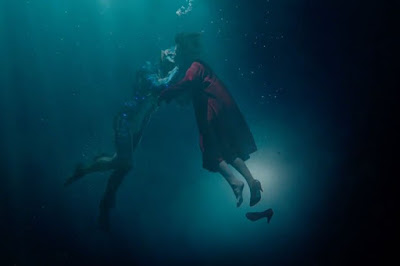 It's always scary walking into a film by one of your favourite directors, with a great cast and an intriguing premise - your most anticipated film of the Festival in fact! - scared that your high expectations will be disappointed. And this in particular in a year of mediocre films - few duds, few highs, just a lot of ok films.  Well, I am pleased to report that Giullermo Del Toro's THE SHAPE OF WATER is an absolute delight - an adult fairy tale that doesn't gloss over the darkness in life, but reinterprets it as a magical fable of love conquering loneliness and prejudice.

Sally Hawkins (FUNNY HA HA) stars as Elisa, a mute cleaner who works at a mysterious government facility in 1960s Baltimore.  She has two good friends  - the first is her neighbour - a washed-up advertising draughtsman (Richard Jenkins) - and the second is her fellow cleaner (Octavia Spencer - THE HELP). Elisa's life changes when she meets a merman (Doug Jones), who is being held captive at the government facility.  His fate is in the hands of a racist, sexually harassing torturer (Michael Shannon) who wants the merman dissected.  But this offends the scientific mind of Michael Stuhlbarg's researcher. He teams up with Elisa to attempt to liberate the merman from the small-minded nasties cornering him.

There's so much to love about this film it's hard to know where to begin. First and foremost we have the stunning visual imagination of GDT - creating a kind of hyper 1960s America with a deep green visual palette, a delight in vintage cinemas and interiors as well as the oppressive bourgeois perfection of 1960s American suburban life, as well as steampunky mechanical widgets filling the laboratory. The use of colour is just perfection.  And then I love how GDT mixes a kind of romantic sensuous love affair with explicit scenes showing Elisa masturbating or a pet coming to a bad end.  This is truly adult fantasy.  And of course, we have the beautiful allegory of the prejudice the merman faces with the civil rights unrest we see on TV and the harassment Elisa faces in the workplace.  Complementing all of GDT's unique vision and execution, we have a wonderfully romantic from Alexandre Desplat, and a movie whose love of movies influences everything from plot points to scene settings to the way in which the main character views herself.

Of course, few movies are perfect and there are a couple of things that I would have altered in THE SHAPE OF WATER. I would have changed the one dream-like reverie - the movie felt fantastic enough as it was without this jarring shift in tone.  And secondly, I'm starting to get a bit frustrated by the typecasting of Michael Shannon as sexually messed up government man (viz BOARDWALK EMPIRE) and Octavia Spencer as sassy black woman who gets to smack her lips and offer folksy wisdom to the lead white actress. It's getting really old and lazy. She needs to be offered and to accept better more varied parts or she risks being written off as a modern day Hattie McDaniel.

THE SHAPE OF WATER has a running time of 119 minutes and is rated R in the USA and 15 in the UK for strong language, violence, sex and nudity. The film played Venice, Telluride, Toronto, Sitges and London. It opens in the UK on Dec 4th, in the USA, Canada and Mexico on Dec 8th, in Brazil on Jan 11th, in France on Jan 17th, in Australia on Jan 25th, in Spain on Jan 26th, in New Zealand and Portugal on Feb 1st, in Switzerland and Netherlands on Feb 15th, in Ireland on Feb 15th and in Argentina and Denmark on Feb 22nd.
Posted by Bina007 at 22:33