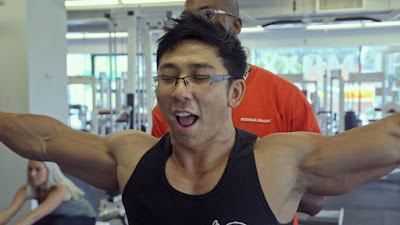 I must admit that I struggled to get through Canadian director Denis Côté's documentary about six body builders.  There's a limit to how much footage I can watch of six men pumping iron, eating protein, getting spray tans and shaving their legs.  I know that the director is trying to show us the unglamorous side of the profession - and boy did we see that.  There's no soundtrack to the film other than hearing people work out really really hard. But I finished watching and discovered that I had no greater understanding of why someone would want to push themselves that hard, and what made these men tick. In fact, the only thing I was left with was a slightly queasy feeling about some of the cinematography which, rather than humanising the men, seemed to objectify them.  I guess one could argue that they are objectifying themselves with their chosen sport, but it felt more than a little voyeuristic and awkward. So - it's dull and potentially disrespectful - there's no reason for me to recommend this movie.

A SKIN SO SOFT has a running time of 94 minutes. It played Locarno Melbourne and Toronto 2017.  There are still tickets left for both screenings at the BFI London Film Festival.
Posted by Bina007 at 12:33