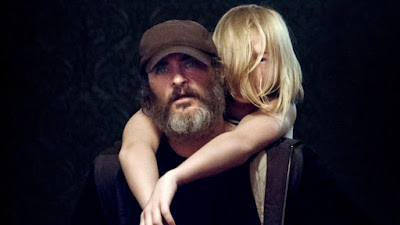 The following is a group review from Meester Phil, Duncan and Nicki and I:

Lynne Ramsay (WE NEED TO TALK ABOUT KEVIN) returns to our screens with the extreme revenge thriller YOU WERE NEVER REALLY HERE.  Joaquin Phoenix plays an extremely disturbed man who was abused by his father as a child and takes care of his mother as an adult.  He's also a veteran who now earns a living rescuing people for money armed with a blunt hammer.  At the start of the film he's commissioned by a politician who's wife just committed suicide to find their runaway daughter who's been captured by a paedophile ring.  Except his exfiltration is messed up by some corrupt cops. At that point, the film goes into a revenge thriller involving potentially some politicians and maybe the idea that the dad was somehow molesting the daughter. The film is deliberately tricksy with the timeline and motivations and how far we can trust the slippery memory and perception of the lead character.

Duncan and Nicki describe the movie as too arthouse, bizarre, all over the place and difficult to follow.  They came out wondering what the point was.  And we're still sitting in the bar trying to figure out what exactly happened. Even Meester Phil conceded that Lynne Ramsay may have been being too obtuse for her own good.  But everyone did love the cinematography - particularly the way in which Lynne Ramsay used extreme close-ups and almost shot from the victims point of view, looking up at a looming killer.   Meester Phil in particular loved the use of mirror imagery, lights through rain, blurred imagery, and the beautiful and impactful shots of underwater scenes. All agree that it was visually great.  Finally, we all really loved Jonny Greenwood's unique and dramatic score, and the use of already existing music for juxtaposition.  There are some very twee songs that underscore some very violent scenes and it works brilliantly.

My final comment is that a lot of the way that violence and revenge was handled reminded her of Park Chan Wook. I walked out of the film thinking that Ramsay had watched a lot of the Vengeance trilogy and taken something of Lynch's use of music.

YOU WERE NEVER REALLY HERE has a running time of 85 minutes. The film is rated 15 for strong violence, injury detail and child sex abuse as a theme. The film played Cannes 2017 where it won Best Screenplay alongside THE KILLING OF A SACRED DEER and Joaquin Phoenix won Best Actor.  It also played London 2017. It opened in 2017 in  Belgium, France and Spain. It opened earlier in 2018 in the Netherlands, the Czech Republic and Romania. It opens on March 9th in the UK, Ireland and Norway; on March 22nd in Denmark, Greece, Croatia and Russia; on April 6th in the USA; on April 13th in Poland; on April 26th in Germany and in Sweden on April 27th.
Posted by Bina007 at 19:15